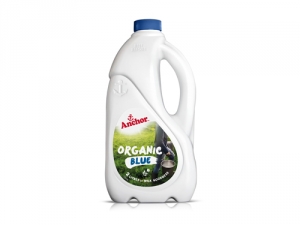 Anchor is aiming to make organic milk more accessible to New Zealanders, with a campaign to launch their organic milk nationwide this month.

While many other organic milk brands are often only available in certain regions or very expensive, Fonterra Brands New Zealand managing director Tim Dean is hoping that the Anchor launch can make organic milk more widely available at a cheaper cost.

"We want to put organic milk in reach of more New Zealanders. We've done just that through our nationwide distribution and providing Anchor Organic at an everyday price that works out at only about 20 cents extra per glass compared to our standard Anchor milk," says Deane.

"Organic farming costs more so we have to pay more for the milk. We also have the added complexity of keeping the milk separate through the collection and bottling processes. So, there is a lot of effort on and off the farm that goes in to creating a certified organic product.

"Seventy two percent of Kiwis tell us that if organic milk was more affordable they would buy it more often. A further 25% told us that if it was available in their regular supermarket that would also make a difference."

The rollout is in response to growing demand from baristas and Kiwi households for organic milk, says Deane.

"The total organic food and beverage market is now worth more than $133 million and the amount of organic milk sold domestically over the past year has increased by more than 50%."

Deane says it is all about giving consumers choice.

"The new organic milk, along with the two new yoghurts, Anchor Uno and Anchor Greek, we launched in the past eight months, demonstrates this and complements Anchor's standard milk range. Anchor Organic joins Mainland Organic cheese, an established organic product we produce."

According to Deane, consumers will also be able to trace their milk from the fridge back to the farms from which it comes.

"Our organic milk is sourced from Fonterra organic farmers in Manawatu. We can pinpoint the farms where our organic milk comes from and follow it from the farm right through to the supermarket shelf," he says.

The organic milk is available to cafes, foodservice outlets and dairies from this week and will be available in supermarkets from May 18. Consumers will be able to choose from Blue or Green options.