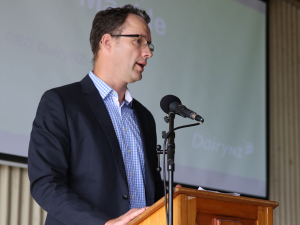 The Government Bill passed with near-unanimous support after National agreed to support the climate change law. It was supported by 119 of the 120 MPs: Act leader David Seymour voted against it.

DairyNZ chief Executive Dr Tim Mackle says farmers are pleased that the Zero Carbon Bill has managed to achieve a degree of bipartisan support that will give farmers certainty into the future.

“All the key elements of the Bill, including the establishment of a Climate Change Commission, a split gas approach for methane and the creation of carbon budgets have strong bipartisan support - and the support of the agricultural sector.”

Unfortunately, the same cannot be said of the methane reduction targets, he adds.

DairyNZ remain firmly opposed to the Governments methane reduction range of 24 – 47% as we believe it is out of step with what science requires and rural economies can sustain.

“This is not a scientific target, but a political one” Mackle added.

“We are encouraged that Minister Shaw (Climate Change Minister James Shaw) has indicated he is considering sending the methane target to the Commission to receive independent advice. DairyNZ very much welcomes this.

“It is important this is done quickly. The Commission is asked to recommend the first three carbon budgets, out to 2035, by early 2022. We need clarity on the methane target before this is done.

“DairyNZ has confidence that the Zero Carbon Bill puts in place the right institutional arrangements to eventually deliver a fair methane reduction target for farmers.

“We will be working with the Government and other sector bodies to ensure this happens.

“Farmers have never been afraid of the facts. They simply want a methane target that is fair and firmly grounded in the best available science, applied in a New Zealand context” Mackle concluded.