‘Bolder’ board would cut director numbers 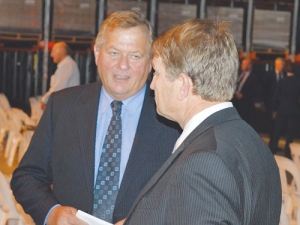 Former Fonterra director Colin Armer is voting against the co-op's governance and representation proposal, which causes him some worries.

"I don't want to be negative; there are really positive [elements] in the final proposal," he told Dairy News. For example, he backs the development of a skills matrix for choosing directors, and strengthening farmer representation on the nominations committee.

But he says the board could have been "much bolder" in cutting the number of directors.

He says farmers are being asked to give increased responsibility to the Shareholders Council before a review of the council's performance.

He is also concerned that Fonterra shareholders must pay a lot of money to buy shares to obtain the right to supply milk to the co-op and to choose directors.

Armer and Greg Gent rocked the co-op last year by proposing the board be cut to nine; 54% of shareholders supported their proposal, well short of the 75% needed to force constitutional changes.

Armer says if Fonterra fails to get 75% support for its proposal on June 10 it won't be a vote of no confidence in the board.

"What farmers will be saying is 'go back to the drawing board and put together something more acceptable to us'."

Armer says farmers have been calling him and Gent to get their views on a proposal, released two weeks ago, suggesting significant changes to a draft proposal released two months ago.

It now recommends a board of seven farmer-directors and four independent directors, instead of six farmer-directors as proposed last month. It brings forward a formal review of the farmer council to this year, from next, and strengthens the scope of this review.

It further proposes that a second farmer council observer be added to a director-nomination committee, but the board/council review group is sticking with its earlier recommendation that farmers choose director candidates nominated by a selection process which would replace the current single transferable vote system for farmer directors.

There would be an equal number of independent and farmer directors on the nominations committee, and a 75% majority would be required for decisionmaking.

The revised proposal provides for farmers to meet and question nominated director candidates before they vote for the such candidates.

​Fonterra now has 13 directors -- nine farmer-elected and four others.