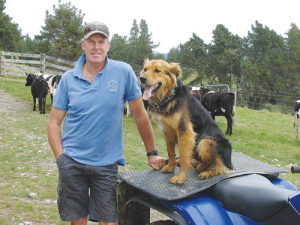 LIC chairman Murray King has won the Cooperative Leader of the Year award.

Presented this month in Christchurch at the Cooperative Business NZ Awards 2018, the award recognises strong leadership and commitment to the co-op sector.

King, a Nelson dairy farmer, has a longstanding links with LIC and dairy farming in the upper South Island. He was first elected to LIC’s board in 2009 and has been re-elected twice as chairman since 2012.

LIC says as chairman, King has steered LIC through significant change and disruption in the dairy sector.

His vision and leadership was vital to the success of LIC’s recent business-wide transformation, made to keep the co-op fit for the future. It included simplifying the share structure as fairer for shareholders, and seperating LIC into two businesses.

The transformation has so far brought $60 million in recurring revenue and $30.7m in one-off benefits for the cooperative. LIC’s most recent results showed it had its best-ever annual revenue.

Chief executive Wayne McNee says King has shown exceptional leadership over the past three years, navigating unprecedented disruption in the industry and protecting and growing LIC for the benefit of its 10,500 shareholders.

“As a strong advocate for the co-op model generally, Murray has worked tirelessly to engage and consult with the New Zealand farming community to ensure their voices continue to be heard.”

The award was presented at the Cooperative Business NZ’s annual dinner in Christchurch this month.