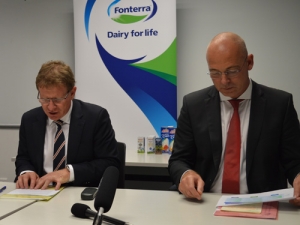 Wilson says that's the message he got from taking part in farmer meetings around the country during the director election campaign.

"We will have a discussion on the capability of the board and the mix between elected and appointed directors," says Wilson.

He says a lot of ground work has been done over the past three years.

The review committee will be made up of board and council members; outside consultants may be engaged as part of the review.

A discussion document will be released January; a special shareholders meeting will be called around June next year.

The Colin Armer/Greg Gent proposal to reduce the board to nine members was supported by 53.8% of farmers. However, the proposal needed 75% support to enable changes to the co-op constitution.

About 65% of shareholders, producing 73% of the co-op's total milk solids, turned out to vote