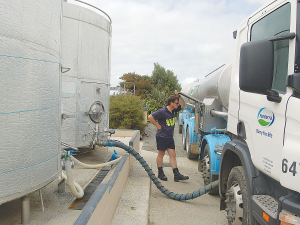 "The co-op considers the prevailing price, particularly since late April, has undervalued Fonterra shares, which is a key reason for announcing this buyback," McBride says.

The buyback may run for up to 12 months. It is separate from Fonterra's plan to spend $300m on supporting liquidity during the transition to a new requirement for farmers to own one Fonterra share for every 3 kgMS they supply to the co-operative, rather than the current one-for-one ration.

McBride says, in making the decision to buy back shares, the board considered prevailing prices in th Fonterra Shareholders Market (FSM), alongside the co-op's strategy and overall business performance.

"When assessing the value of Fonterra shares the board considers a range of factors, including the strong industry fundamentals and the co-op's long-term strategy and performance targets.

"We also consider the merits of a buy-back alongside other investment opportunities we have in the pipeline.

"These have a range of risk and return profiles, but overall we believe there is room in our portfolio of investments for buying back shares at a price that we consider to be undervalued. Once purchased by the co-op, these shares will be cancelled, which means futur earnings are distributed amongst a lower number of shares."

In an email to farmers, McBride says the co-op will report how many shares it buys and the average price the day after, "so you will know what we have bought".

Peter McBride notes that Fonterra is preparing to implement the Flexible Shareholding structure but has not yet set a date for when it will be effective.

In April, the Government announced its support for the structure and has signalled that it expects the amendments to progress through Parliament this year.

"We remind shareholders that even though share compliance obligations remain on hold until at least 6 months after the new structure is effective, shareholders can still buy or sell shares within Fonterra's current constitutional limits (which is generally 1x - 2x supplying shareholders' three-season average milk supply).

"Shareholders should seek advice from their financial advisor, accountant, lawyer, or rural professional before making any decisions," says McBride.

The maximum number of shares that may be acquired pursuant to this buyback programme and the Transitional Buyback (should that also proceed under section 65 of the Companies Act) taken together over the next 12 months is 80,667,893 shares.

This number of shares is set in accordance with section 65 of the Companies Act and represents 5% of Fonterra's shares on issues 12 months prior to the acquisition of shares.

The number of shares purchased under the buyback from time to time, and the average price, will be notified to the NZX and ASX on the business day following the date on which those shares are brought back.