Nothing to lose, much to gain 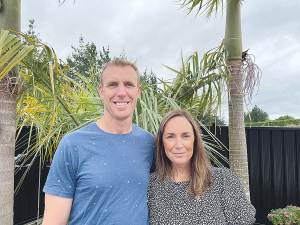 Bay of Plenty Share Farmer of the Year winners Scott and Becks O’Brien.

Bay of Plenty Share Farmer of the Year winners Scott and Becks O’Brien say farmers have nothing to lose and everything to gain in Dairy Industry Awards.

Their advice to potential entrants is to give it a go.

“Whether you come first or last doesn’t really matter, because the networking with so many different people, and the feedback and information and scrutiny you’re getting on your business is as valuable as winning. You just have to give it a go. It’s little nerve wracking, but we really enjoyed it, and what you get out of it is so worth it.”

The O’Briens are sharemilking 900 cows on two farms about 10 minutes apart in the Galatea district. Since 2017 they have milked 650 cows on Rory and Susan Gordon’s 260-hectare farm, and since 2020 have been milking 250 cows on Cathy and Peter Brown’s 100-hectare property.

Scott has been dairy farming since he left school, just over 20 years ago. He and Becks have been married for 16 years. The start of their relationship was dramatic, with 21-year-old Becks diagnosed with cancer just after they met. It has permanently affected her voice, but after being at home with their young family – Hunter (12), Summer (10) and Piper (8) – she has become an educational support worker at Galatea School (where Scott is also on the board of trustees).

They say the cancer is part of their story and helps to define the people they are today; recognising family and experiences are more important than money.

“When we get a break, we make sure we get away from the farm and visit family and friends,” Scott says.

“And do Ironman,” Becks adds.

“I’m semi-retired now, but it has been a big thing for a few years,” Scott says.

Prior to moving to Galatea in 2017, they’d spent nine years in Taupo, with Scott employed as operations manager on a Māori trust farm.

“Before that, we’d spent three years variable order sharemilking a smaller farm in the Coromandel,” Scott explains. “We always wanted to own our own cows and went it happened it just fell into place really.”

They won the 2011 regional Dairy Industry Awards Manager of the Year title when they were in Taupo. Part of that process was talking about their plans for the future, and as a result, they bought a rental property in Tauranga that was on-sold to help them into sharemilking six years later.

They bought the Friesian herd from the owner and have since been crossbreeding with a goal of building a large-framed crossbred herd (F12).

“We see them as a more efficient animal going forward, especially looking at stocking rates for environmental reasons. We’re not going too far down that track though as we don’t want to lose the frame size. We want large animals, but they have to be efficient.”

Securing a great employer is the key for young people entering the dairy industry.

Central Plateau Dairy Manager of the Year, Satveer Singh, comes from a farming background in India, where his father is an organic farmer with Sahiwal cows.

A former Auckland sales and marketing executive and a former adventure tourism guide and boutique lodge manager have won the 2022 Central Plateau Share Farmer of the Year title.