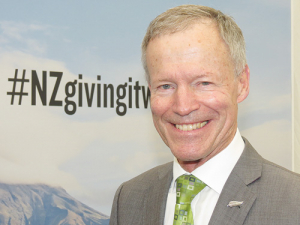 New Zealand Trade and Enterprise (NZTE) has for the first time exhibited at the Irish National Ploughing Championships, near Tullamore, County Offaly (Ireland midlands), on September 20-22.

Sir Lockwood told Dairy News at the event that NZ is exploring where its agritech businesses can be involved. Ireland has a similar farming system to NZ's so it’s natural that several NZ high-tech agri companies were at Tullamore.

The ploughing champs resemble NZ National Fieldays, with a massive array of farm equipment and technology visited by about 250,000. Notably different, though, is that the event is held every two years in a different location; it has no permanent venue but still crowds visit from all over Ireland.

Some dedicated souls are interested in the ploughing but the main attraction for visitors is the mass of exhibits.

Sir Lockwood says the Irish realise innovation is crucial to the sustainability of their farming industry and that R&D is very important. And though Irish and NZ farmers individually have concerns about markets, there is a lot of room for working together as NZ has done with US sheep producers. The similarity of farming in Ireland and NZ should help foster such cooperation, he says.

Brexit remains a hot topic in Ireland but it is too early to predict how the issue will pan out.

“The British government is exploring a range of approaches to the EU. We are working with them closely because of our experience in international trade negotiations. We are seen as a world leader in trade liberalisation, so the UK government is looking to us for help."

One issue to be resolved is whether or not the UK will have a customs union with the EU and what that might mean to trade with other countries.