Pasture, power and robots at SMASH 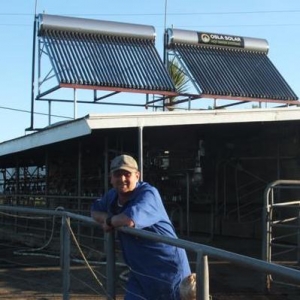 Now in its third year, SMASH, supported by DairyNZ, is preparing for its 2013 events, some of which are taking place during February and March in Cambridge and Morrinsville.

SMASH chairman Noldy Rust says the days will be informative for dairy farmers, with the first event on February 12 in Cambridge, looking at how to produce and save energy on-farm.

"All farmers are conscious of how energy costs take significant dollars from their bottomline, but not all know how to set their dairy up to be energy efficient, and know whether the different energy generation technologies are actually worthwhile."

NIWA's Stephan Heubeck will share information on energy generation (including solar, wind and microhydro) and NIWA research into generating energy from effluent.

Jim Miller, an energy consultant to Fonterra, will talk about how energy is used in the dairy shed and how farmers can make operational changes to save energy. Suppliers for the different energy generation systems will also be on-hand to answer questions.

Farmer, Andy Knibbs (pictured), will be on hand at the SMASH energy day to talk about his solar panels.

The second event, on February 21 in Morrinsville, is focusing on pasture persistence.

"Brian and Bridget Frost's farm was converted to tall fescue to deal with persistence issues, something many farmers struggle with, as pastures don't survive more than a year or two. The Frosts will share what they have learnt," says Rust.

DairyNZ senior scientist Errol Thom and farm systems specialist Chris Glassey will also talk about how to establish persistent pastures and how tall fescue can fit into existing systems.

The final SMASH event, on March 5, will be held on John Fisher's farm in Cambridge.

"We'll look at his robotic milking machine set-up and see this exciting technology in action," says Rust. "John will also share why they decided robotics was for them, how the farm has been set-up to work with it and the lessons learnt so far."

Although geared towards farmers with smaller operations, all are welcome to attend these events, as there is much of interest for everyone.