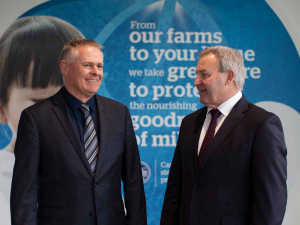 McBride will replace John Monaghan when he retires as chair and director at the co-op’s annual meeting in November. He is a farmer director and joined Fonterra’s board in 2018.

Monaghan says that the early announcement of McBride as chairman-elect is part of the board’s commitment to planned governance succession.

“We have made significant progress over the past two years in our effort to refresh our co-op’s purpose, strategy and culture. It is important to the board that we provide stability while Miles (chief executive Miles Hurrell) and his team continue to embed the changes and maintain our momentum.

“Making this decision now also gives our farmer-owners transparency of leadership prior to this years’ director elections and allows Peter and I a period of handover before I retire from the board in November,” says Monaghan.

McBride says he is humbled to be selected by his fellow directors and is looking forward to leading the co-op on behalf of its 10,000 farming families.

“I grew up on a dairy farm near Te Aroha and today my wife Linda and I run the family farm milking 950 cows in the South Waikato, so dairy has always been part of my life.

“I’m looking forward to working alongside John for the next few months before leading our co-op into its next phase and creating value for the benefit of our farmer owners and unit holders.

“When John retires from the Board in November it will mark almost two decades of service to our co-op, the last 12 years as a Director. He will leave behind a board culture of shared responsibility, which is something I will look to build on as the new chairman,” says McBride.