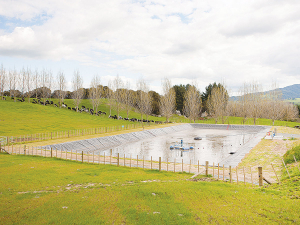 To keep the grass growing, Mitchell has been tapping into “free fertiliser” from his effluent pond for the past 10 years.

Effluent is sprayed onto 7ha of the farm at a time and within a week the cows can graze that area.

To make sure that the effluent is easily irrigated, Mitchell says he has been using the Impact effluent treatment from Bioworks, pouring five litres of the product into the pond every month.

Mitchell built the 1200 cubic metre effluent pond in 2009. The pond became anaerobic not long after he started using it and a thick crust formed on top.

“There was even grass growing on top of the crusted pond,” he told Dairy News.

Irrigating the crusty effluent wasn’t easy, he says. Cows were also delaying their moving to grazing paddocks sprayed with the crusting effluent. The odour from the pond was also becoming an issue.

“You couldn’t put cows onto an irrigated paddock until about three weeks after the cannon had been in the paddock,” he says.

Mitchell started looking for solutions, settling on Impact because it is formulated to speed up the pond’s natural oxidation process.

“The crust went away leaving just green water in the pond. We put them in paddocks now and the cows are there next week munching away.

“There’s no need for a stirrer now, there’s no crust and Impact does its own job. We are getting green, mixed effluent going on the grass and it’s all rich fertiliser.”

Mitchell says the bad smell has gone away.

“When I look at the pond now, it’s just full of green water. I can see bubbles coming up and I know the bacteria are doing their stuff under water.”