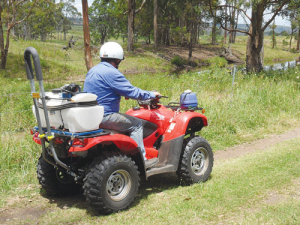 The war of words over quad bike safety in Australia has recently been elevated.

A manufacturers’ group has gotten together to launch a Supreme Court action to block WorkSafe Victoria from forcing employers to fit operator protection devices (OPD) where there is a risk of rollover.

In March WorkSafe Victoria said any employer who believed there was a risk of a quad rollover on farm or workplace should fit a suitably designed and tested OPD, or risk an enforcement notice for not doing so.

This month Honda, Yamaha, Kawasaki, Suzuki and BRP have called on the Supreme Court to declare “that WorkSafe Victoria has no statutory power to enforce employers to fit OPDs”. And they say quad operators “should not try to fit an OPD to a quad or use a quad fitted with such a device – a quad-bar, roll cage or restraint system”.

WorkSafe responded saying the bike makers’ claim was without merit and would be vigorously defended. WorkSafe insisted “there are many examples of riders being crushed to death by quads not fitted with OPDs, and we believe a suitably designed and tested device is an appropriate measure to control the risk”

The makers group says WorkSafe has overreached its powers, and cite US research to back their claims that OPDs pose more injury risks than benefits, especially so for riders not wearing helmets.

The makers group says that under the Occupational Health and Safety Act employers must also identify any potential hazards associated with quad-bars or similar ROPS style fitments.

Employers should also consider the US research and firm advice from manufacturers not to fit such devices, the group says.

WorkSafe claims fitting OPDs is a means of saving lives and it defends its assumed right to issue enforcement notices as a way of addressing rollover risks.

The makers group is now investigating the Victoria Government’s AU$6 million quad safety rebate scheme, and has subpoenaed the Victorian Farmers Federation to say how many devices have been fitted by farmers taking advantage of the $600 rebate claimable on up to two devices.