Weigh and go without woe 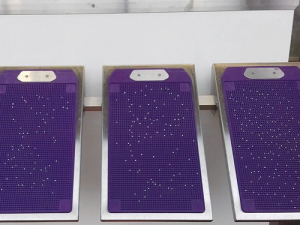 The high cost of fertiliser makes it important to understand how well a spreader performs – in the quantity applied and the spread pattern.

Quantity is taken care of by calibration, to compare set rates with actual weights, and spread pattern is usually done by driving over test trays to get a result known as the co-efficient of variation.

German spreading and seeding specialist Amazone looks to have made the task a little easier with its recently launched EasyCheck system that combines the power of a mobile phone app with a set of drive-over rubber mats, rather than the more traditional tray system.

In use, 16 purple rubber mats are placed in four rows across the paddock at pre-determined distances from the tramlines. Passing down the tramline the operator spreads over the mats then photographs each mat with a smartphone; from there the app calculates the amount of fertiliser and analyses the spread pattern.

Where the spread pattern is incorrect or uneven the app will suggest areas to look at such as disc speed, shutter opening, drop point or spreading vane positions, dependent on machine.

The mats are light enough to be carried by one person; placement takes a few minutes and should provide a more workable option than the more typical bulky plastic or cardboard trays.

The purple colour of the mats is said to allow easier testing of light or dark coloured products, although the manufacturer says the smartphone will need a camera with good resolution.