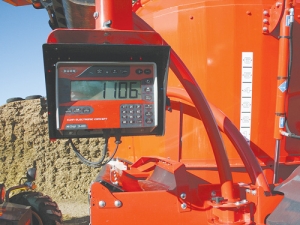 Accurate information is given to driver as load is being formed.

Kuhn NZ has announced updates to its electronic weighing and data management systems for Euromix and Profile diet feeders which can be supplied as an option or retro-fitted to existing machines.

The KDW 340 and 360 weighing and feed tracking systems use three load cells mounted at the drawbar and on the main chassis to weigh accurate to 0.5kg; they can store 200 ingredients or 25 mixes containing eight ingredients each. They can also recalculate each item as the numbers of animals in a group change or as the load size changes.

Self-contained and powered by a machine mounted ancillary battery, the unit can be used unhitched from the tractor.

A clear back-lit display of six figures with 43mm high characters makes the unit useable in bright sun or darkness.

Data is easily transferred to a farm office via a standard USB flash drive.

In conjunction with the weighing units, a wireless display unit called KDR 300/400 can be fitted to a loader tractor or telehandler to give the operator accurate information about the load as it is being formed. The units have 90m and 300m ranges, respectively, and the display units have six-digit 25mm high characters, and can work with up to 12 different feed wagons via separate operating channels.

Brian Robertson, Kuhn operations manager, noted "the ability to weigh out precise rations is the key to efficient milk production, and the unit's ability to measure to 0.5kg accuracy and transfer data to dairy professionals such as nutritionists or vets will be incredibly useful."