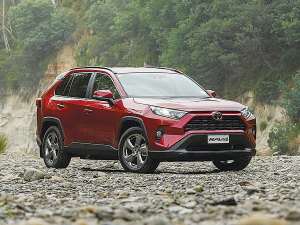 First unveiled in 1989 at the Tokyo Motorshow, the RAV4 has become New Zealand’s biggest selling SUV with 398,551 sold and a following among drivers of all ages.

The 2019 RAV4 comes in three powertrain options, including a 2.5L hybrid-electric petrol engine model of 131kW and mated to an electronically controlled continuously variable transmission (E-CVT). This increases to 163kW2 when combined with the hybrid system.

In addition, the RAV4 hybrid includes an E-Four AWD system that uses a dedicated electric motor to power the rear wheels when needed. The system sends up to 50% of the torque to the rear axle and the differential can then send it in varying amounts to the individual wheels. Operating independently from the hybrid system’s front electric motor, and driving the rear wheels alone, the E-Four smoothly switches the RAV4 Hybrid AWD to all wheel-drive on slippery road surfaces and from stationary starts.

The Adventure also has a Toyota first – a dynamic torque vectoring AWD system.

Petrol all wheel-drive models also offer a multi-terrain option allowing the driver to select from mud and sand mode for beach driving or rock and dirt for off-road trails.

The 2019 RAV4 is made on the Toyota New Global Architecture platform. It has a low centre of gravity, much increased body rigidity and is wider, higher and longer (2690mm) than the current model. This allows more cabin space, particularly in the back seat, better access to the rear and a larger rear door opening angle.

The E-Four system’s extra traction gives the hybrid AWD a 1500kg towing capacity, said by the maker to be among the highest achieved by a hybrid vehicle. This is matched by the 2.5L petrol model. The 2WD 2.0L petrol model can tow 800kg, and all models include trailer sway control which integrates braking of individual wheels and engine torque control to help quickly bring a swaying trailer back under control.