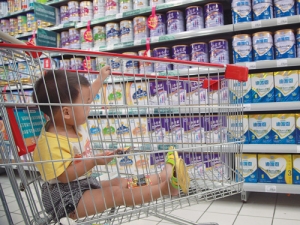 The products are outperforming all other dairy categories in the last 12 months and generating headlines with news of shortages and strategic manoeuvring by major producers.

Strong demand growth has left suppliers playing catch-up, with reports of local shortages and sales restrictions throughout Australia in 2015.

A series of strategic partnerships and investments suggest companies have taken notice and are betting heavily on continued growth in this market segment.

Supermarket figures indicate that sales of infant formula grew 37.1% by volume and 45.3% by value for the 12 months to January 2016, illustrating the increased diversification within the market, as niche, higher-value product ranges have gained market share.

By way of comparison, chilled fresh milk and chilled cheese sales increased by 1.5% and 1.0% in value respectively over the same period.

Sales restrictions limiting the number of cans purchasable in a single transaction remain in force, prompted by community concerns over shortages in supermarkets.

The issue remains controversial, with many attributing domestic retail shortages to growth in private parallel exports to East Asia and Southeast Asia, where concerns regarding local food safety have created a strong preference for more trusted international brands.

Lack of data makes it impossible to say to what extent parallel exports have driven demand for infant formula. But since there is little change in Australian fertility rates, total birth numbers or apparent consumer trends, it appears that domestic consumption has not caused the increase in demand.

Recent trade liberalisation efforts may soon reduce the importance of parallel imports, as agreements such as the China Free Trade Agreement (ChAFTA) and the Trans-Pacific Partnership (TPP) come into effect and Australian producers gain greater access to key markets in the region.

Several processors including Tatura and Murray Goulburn have already received visits and certification from the CNCA, China's food standards body -- a necessary precondition for direct supply to China's retail market, and more look set to follow.

Fonterra has also recently announced its acquisition of an 18.8% stake in Chinese infant formula manufacturer Beingmate, after an announcement of a joint venture between the two companies centring on Fonterra's existing Darnum milk processing plant.

The surge in demand for infant formula has seen a flurry of activity in the sector over the last six months, as processors and manufacturers seek strategic partnerships with companies with experience in nutritional and supplementary health products. Recent examples include the five-year partnerships of Blackmores/Bega Cheese and Bellamy's/Fonterra Australia, announced in September and November 2015 respectively.

Murray Goulburn announced two separate supply agreements in March this year, partnering with Mead Johnson Nutrition and Indonesia's Kalbe Nutritionals to increase its exposure to East Asia and Southeast Asia markets. These helped give rise to Murray Goulburn's plans to increase supply with a new processing facility in Koroit, with an annual production capacity of 45,000 tonnes.

For comparison, Australian supermarket sales of infant formula in the 12 months to January 2016 totalled about 16,000 tonnes.

• Laurie Walker, is an analyst with Dairy Australia.