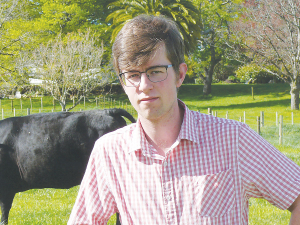 Bram Paans has just completed his three-year Bachelor of Horticultural Science at Massey University and he also took out the Zespri prize for excellence in horticulture.

Massey University's top horticultural student for 2021 believes there'd be real benefit if there was greater collaboration between organic and conventional farmers.

Only 18-years old Bram Paans has just completed his three-year Bachelor of Horticultural Science degree - during which he also took out the Zespri prize for excellence in horticulture.

He told Hort News that both the organic and the conventional farming sector could learn much from each other. Paans says there are principles in organic farming that could be applied in conventional agriculture and horticultural systems. He reckons there are a lot of new technologies and knowledge available now that could be shared.

"I think a lot of conventional farming systems see things just through a chemical lens - how many nutrients are there, what does the plant need and how much fertiliser to chuck on," Paans explains.

"If there is problem you just spray. But the farming systems are more complicated and there is lot of biology going on. If you just take a chemical approach you come across problems you can't explain using chemistry."

At the age of five, Paans came from Holland to NZ with his parents. They bought a four hectare block, near Masterton in the Wairarapa, where they run an indoor organic and hydroponic vegetable growing operation.

He says being brought up in a farming business did help shape his decision to do a horticultural science degree at Massey, although at one stage he toyed with the idea of something like engineering.

Paans told Hort News one days he had a real think about what to do at university and suddenly realised just how much he loved horticulture.

"I did a search online and then realised that Massey was the only place that offered a dedicated horticultural science degree, and that was it," he says.

"The degree is great because while the focus is obviously on horticulture, there are other aspects to it such as internationals agribusiness, soil science, finance and the international supply chain. It's been a good degree."

Paans is unusual in that at just 18 years old, he now has a three year degree at an age when most students are starting universty. This was because he skipped a couple of years at school. In 2022, Paans is planning to go back to Massey to do his master's degree - also in horticulture - but he's also keen to do some soil science papers.

Where To From Here?

As for the future, Paans is taking a step towards this over the summer break, doing an internship with Landwise - a company which promotes sustainability.

“I am quite interested in the area of extension services. A lot of graduates are going into farming, business, but there are not enough organisations out there who are trying to bring the academic knowledge from university and re-morph it into something that farmers can use,” he told Hort News.

“The idea is to bridge the disconnect between universities and all the work they do in their little world and what the farmers do. Extension is very important to bridge that gap and I am quite interested in the extension side of the business.”

Paans sees headwinds for the sector coming down the road – especially for the commercial growing operations. He points to the impact of urban development on to highly productive soils, which he says in time will limit the ability of NZ to produce enough vegetables to feed the country.

“If you are a traditional, vegetable grower in NZ you have to work with the supermarkets. If you talk to any domestic vegetable grower, including my parents, prices for their products have remained much the same for the last 20 years,” he explains.

“Essentially, prices for vegetables are going down and down each year. There is big disconnect about the value of food between growers and consumers. Food is seen as a commodity – meaning it has to be cheap, cheap, cheap.”

Paans says one day he would like to return to the Wairarapa and buy a block of land and grow vegetables. However, he says the high price of land – coupled with low product prices – may make this an impossible dream.

Study on sheep's impact on water

While there is clear proof that cattle, deer and pigs cause poor water quality when allowed to graze near waterways, little is known about what impact sheep have. Peter Burke reports on a research project being run by Massey University to find out more about how sheep behave around streams and waterways.