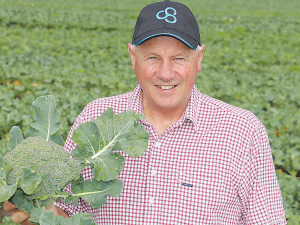 The Dalrymple brother’s latest forays are well outside their farming comfort zones.

Roger is running a highly sophisticated blueberry operation, while Hew has moved into fresh vegetable production – with broccoli and cabbage the focus.

Waitatapia Station has been in the Dalrymple family for over 100 years. With lease blocks included, it consists of 2200 hectares, of which 750 are irrigated. About 30 people are employed in the business, and at peak times this can increase.

Hew Dalrymple runs the logging and cropping businesses. This involves peas and corn for McCain’s, also potatoes, onions, squash, maize, fodder beet and recently quinoa has been added to the list.

However, in the last three years, Hew had an offer from nearby Marton-based Speirs Foods to produce fresh vegetables for their speciality salad market. He took up the challenge and as a result about 60 hectares of the farm is now devoted to growing broccoli, cabbage and a smaller amount of cauliflower.

“They came to us and said this would be great – you guys have got the irrigation and infrastructure and the headspace to get into this new business because you are crop growers,” he told Hort News.

When Speirs talk about headspace, they likely mean that the Dalrymples, who in all aspects of their farming businesses, make extensive use of technology to improve efficiency and the quality of their stock and crops. The brothers work closely with Massey University on a number of leading-edge research projects.

But Hew is quick to point out that growing fresh vegetables is quite different to the crops he’s traditionally grown. He says there is more intensity because they are constantly planting and harvesting all-year-round – unlike the other crops they grow. Labour is an issue and new skills have to be quickly learned which he says they are still learning.

“Being with Speirs has the advantage that we are only twenty minutes from their factory and their staff have commented on the freshness of our product,” he told Hort News.

All the broccoli, cabbage and cauliflower that Waitatapia supplies to Speirs is cut up and processed, mixed in with other veggies and made into different ready pack salads.

These are then sold to the Countdown chain of supermarkets, as well as New World, 4 Square and Pak ‘n Save. Some is also sold in specialist delicatessens.

Hew Dalrymple says they also sell on the open market but notes that this is terrible and prices are lower. At present, Waitatapia is producing about 2500 tonnes of cabbage, nearly 2 million head of broccoli plus some cauliflower. The fresh veggie business is run as a separate business unit – with its own manager and staff of about eight people. Hew says about 20% of his time is devoted to the new enterprise.

“I’m happy with the step up to fresh vegetables.  We have struggled, but it’s now starting to come right,” he told Hort News.

“A key point is that being a higher risk operation it needs to make more money on average than the other forms of farming that we do.

“We are just starting to get there now and it’s all about getting a whole lot of little things right. But the big plus for us was that when we went into it was that we had a contract to sell the bulk of the vegetables to Speirs,” he says.

For Hew Dalrymple, taking on a new challenge is nothing out of the ordinary – the family has been doing this for 100 years.

Local blueberries sales on the rise

Kiwis ate a record seven million punnets of fresh locally-grown blueberries last season and are expected to eat even more this summer.

Blueberries New Zealand has teamed up with a record breaking athlete, to further pole vault this super fruit’s profile globally.

No blues for these berries

Plenty of thrills on this Blueberry hill

The taste of a single blueberry was enough to launch Harry and Anne Frost into developing a blueberry orchard near Rotorua.