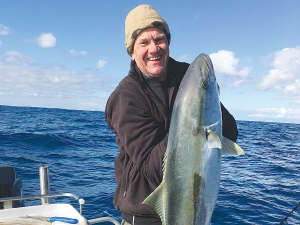 There will be more fishing time for Gordon Reid now that he has retired from tutoring horticulture students.

Hawke's Bay horticulture lecturer and programme co-ordinator Gordon Reid is retiring from his position after 19 years.

A passion for horticulture, the soil and seeing students succeed has underpinned Reid’s tenure at the Eastern Institute of Technology (EIT) campus in Taradale.

The land has always been in his blood, having grown up on his parents’ orchard in York Road on the outskirts of Hastings with his three older siblings. Taking an interest in the land beneath the orchard, he studied geography, progressing to a master’s degree in physical geography.

After teaching at a local high school for 16 years, Reid turned his hand to growing asparagus and tomatoes commercially for 12 years. The 2003 move to EIT was a “natural evolution” he says.

“I taught, I grew things and then I taught about growing things, so I quite like that as a nice tight story really.”

Reid began as a part-time horticulture tutor before specialising in the fruit production area. He was also involved with the Tertiary Education Union (TEU) including as long-standing branch chair.

Seeing the success of the programme is “quite affirming,” he says.

Despite retiring, Reid doesn’t plan on slowing down anytime soon with plans to take part in cycle tours, go fishing and improve his woodworking skills.

He is also interested in volunteering for the likes of the Department of Conservation and having put his PhD on the “backburner” after his masters, he now aspires to complete it.

Paul Keats, assistant head of school (primary industries) says Reid has been an integral part of the faculty during his 19 years of service.

“Gordon’s been heavily involved with the Horticulture Apprenticeship Scheme and is valued by industry for producing quality graduates.”

Stepping into Reid’s role will be his former student, Steven Hartley, who owns an apple orchard.

The Eastern Institute of Technology (EIT) School of Viticulture and Wine Science will offer a new suite of postgraduate qualiications in Wine Business and Innovation, starting from July 2021.