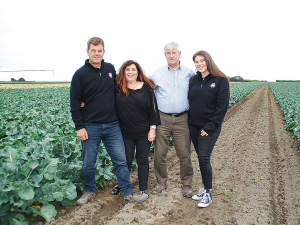 Robin Oakley says the biggest upset for his business brought about by the COVID-19 emergency was the change in shopping patterns and the way people rushed the supermarkets before the lockdown took effect.

“If there’s a big demand for broccoli we can’t suddenly magic up more,” he told Rural News. “We ran out last week.”

He adds that then for the best part of a week people hadn’t been back to the supermarket, while the broccoli harvest has had to continue.

Oakley says he was very fortunate to have very good post-harvest storage to keep it in good condition. However, he warns that if people don’t return to the supermarkets “sooner rather than later” there was a danger of crop having to be left wasting in the paddocks.

With his wife Shirleen, daughter April and father Graeme, Robin runs Oakley’s Premium Fresh Vegetables Ltd – a five-generation family business based at Southbridge. It also has leased blocks as far away as Amberley and Hororata, with a total of 350ha in vegetable production.

Oakley sells mostly through supermarkets in both the North and South Islands, including his own gourmet potato brands.

That puts him in a better position than many horticulturalists as only supermarkets have been allowed to be open and many growers have found their sales streams have dried up.

Nevertheless, the COVID-19 emergency has come at a bad time.

Oakley says they are in the middle of the main potato harvest and are flat out packing potatoes. They’re also flat out both harvesting and planting broccoli, about to start harvesting pumpkins. There’s also intermittent beetroot harvesting on the schedule.

“It’s the single busiest time of the year,” he told Rural News.

Oakley says the next potential impact of COVID-19, and the bit that worries him the most, is keeping his workforce healthy.

A week before the lockdown came into place, Oakley implemented his own policies around isolating different groups of workers. Depending on the job they do, where they do it and – in some cases – where the group is isolating at home together.

Each group has its own smoko facilities and toilets, with six new toilets brought on site and handwashing facilities… “albeit set up outside and a bit primitive” … featuring lever taps that can be operated by an elbow.

Oakley admits it was more by good luck than by good management that he has groups he’s been able to keep together who were already in self-isolation together in his farm accommodation.

That includes one group of RSE workers from Vanuatu and a working holiday group who had been travelling together.

Broccoli harvesting requires six or seven people cutting the heads and loading them onto a harvesting belt to carry them into a hopper. There was no way they could do that job while maintaining 2-metre distancing.

Oakley said he was using email and other methods to communicate in a very transparent way to keep all staff very well informed.

“It’s not only about having your people feel safe, it’s a matter of making sure you are doing things that they are safe,” he says. “I think we’ve done everything we possibly can.”