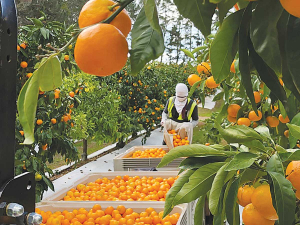 Around 20 hectares of T&G Global's mandarin orchards in Northland have transformed to a later season variety over the past two years.

Around 20 hectares of T&G Global’s mandarin orchards in Northland have transformed to a later-season variety over the past two years – via a dose of kiwi ingenuity and clever grafting.

Graft wood from mature trees in 2018 and 2019 was collected and embedded onto 24,000 freshly cut stumps of rootstock, which were previously Satsuma mandarins. In total, T&G Global has converted about 20 hectares of mandarins in Kerikeri to Afourer – 11ha two years ago and 9ha in 2019.

The company says the new mandarins are now showing excellent growth only two years after planting, with the first 10ha now bearing fruit.

“It was a massive project which had significant risks, so we’re very pleased to see this exciting new late-season variety taking off,” explains T&G’s Tom Chamberlain.

Chamberlain says growing new trees would usually take years to bear fruit, but by using this grafting process it has enabled the tree to fruit over a shorter period of time – rather than replanting with young plants.

“I’m super excited and pleased about it as it was a big risk. It looks like the gamble will pay off.”

He says the later season Afourer variety has a bright orange colour and excellent flavour.

Because the variety is harvested after the Satsuma season, the company can get mandarins in NZ households for longer.

Chamberlain adds that it’s also opened up an export opportunity for the company with strong demand for citrus coming from consumers in Hong Kong and Japan.

“We couldn’t get the volumes they demanded to those export markets this season, so we’re excited about this extended window. It’s also a fruit that travels well to export markets.”

New Zealand's largest citrus grower, T&G Fresh, says it is underway with harvesting the first of this season's satsuma mandarins.

A team of 45 office-based staff from T&G – known as the ‘Envy Army’ – have been working part-time shifts at the company’s Hawke’s Bay packhouses to ensure its apples get to key global markets.

Strong growth for T&G in a year of uncertainty