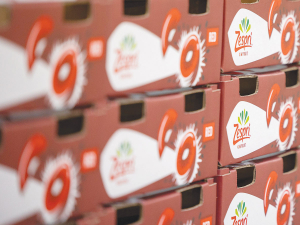 The red kiwifruit will be named Zespri RubyRed Kiwifruit for the opening 2022 season.

It's official, Zespri has confirmed that its current red kiwifruit will be named Zespri RubyRed Kiwifruit for the first year of sales of commercial volumes in the upcoming 2022 season.

The red variety was commercialised in December 2019 and initially marketed as Zespri Red during the sales trials. Now the newly-branded kiwifruit will be available in commercial volumes for the first time in 2022 in NZ, Singapore, Japan and China. Volumes are expected to increase from 700,000 trays in 2021 to around 250,000 trays in 2022.

"Consumers have been attracted to the fruit's unique colour profile and berry-like taste and we've been delighted with their feedback," he told Hort News. "The consumer response to our limited slaes trials over the last three seasons have exceeded expectations and suggest Zespri RubyRed Kiwifruit is able to attract new and younger consumers into the kiwifruit category, complementing our offering of the world's best kiwifruit."

Shih says as Zespri moved towards establishing commercial volumes of the red kiwifruit, they've been exploring names that better embody the essence of the fruit, which he hopes resonates with our consumers.

He says throughout their consumer research, Zespri RubyRed Kiwifruit has remained at the top of consumer's preference list. He says this not only because it reflects the rare and precious nature of the fruit but the ruby element gives consumers an immediate sense of that alluring red colour.

"Consumer research was undertaken in a number of markets, and also took into account the need for the new name to translate across different languages given the fruit's broad appeal in Asian markets. The name is in the process of being trademarked in Zespri's key markets."

Shih says the shorter shelf-life of RubyRed compared to Zespri SunGold and Zespri Green has meant that they've prioritised their Asian markets given the shorter shipping times. He says, in the meantime, they are continuing growing trials in Zespri's Northern Hemisphere production locations - such as Italy to determine the commercial potential of a red cultivar in different environments.

"We remain committed to providing the world's leading portfolio of fresh, high quality and safe kiwifruit and we're looking forward to even more consumers being able to try Zespri RubyRed Kiwifruit in the years ahead."

Zespri is ringing in major changes in its systems to deal with an expected shortfall of 6500 workers to pick this season's kiwifruit crop.

The horticulture and wine grape industries in New Zealand are collecting donations to help with the recovery in Tonga, following…

NZ's horticulture sector is facing headwinds on a number of fronts, according to Horticultural Export Authority (HEA) chief executive Simon…