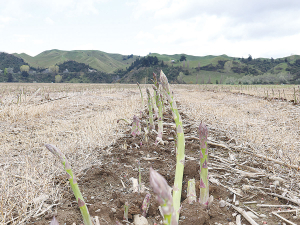 Asparagus can grow just as well on the free draining and fertile soils at Mangaweka as it can where it is traditionally grown on sand country.

The settng is the beautiful unspoilt Kawhatau valley, through which a river of the same name runs down and feeds the larger Rangitikei River.

Further in the east, is the Ruahine Ranges, the tops snow-covered during winter. The area is about 500 metres above sea level and one would normally class it as typical good sheep and beef country. And that's what it is - except for about 80ha of unfenced land where asparagus is grown.

The property is owned by George and Diana Turney, who emigrated from England in 1965 and have been involved in farming all their life. George was always impressed with the soils in the Rangitikei area and after farming sheep and beef, decided to take the punt and buy the present property in the Kawhatau and plant asparagus. That was about 25 years ago.

At the same time, Sam Rainey was growing up on his parents' sheep and beef farm about a kilometre up the road and saw the development of the asparagus operation. Fast forward to the present day and after doing a B Ag Com at Lincoln, he worked on other farms and in business and is now the manager of the operation.

Rainey says when George and Diana first bought the property, they grew a small acreage of asparagus and took down all the fences and ran a bull-techno operation. But now the bulls are gone and just a few cows are winter grazed on the lower terraces of the property. The rest is in asparagus.

He says the key to the operation is the soil type - free draining and fertile. It is proof that asparagus can grow just as well on these soils as it can where it is traditionally grown on sand country.

"It is a spring vegetable and when we get these fcold fronts coming through in September and October, it tends to be the most unpredictable and wet time of the year, and occasionally it can cause quality issues," Rainey told Hort News. "But once you get over that and into November, we get really good production."

When Hort News visited the property in late September, Rainey and his staff were in the final stages of preparing for the harvest. The packhouse was being set up and at the same time the first spears of asparagus were starting to appear.

While the total size of the property is 80 hectares, they will pick just 65 hectares this season - which equates to up to 250 tonnes.

While the soil and climate in the Kawhatau may be good for growing asparagus, the central North Island is far from ideal when it comes to sourcing labour to pick the crop. It's sparsely populated for a start.

"The challenge is that it's a short harvest window and to pull 50-60 locals out of Taihape or Mangaweka is unrealistic," Rainey says.

To that end, they have traditionally employed RSE workers from Vanuatu to do this work. He says these workers are desperately keen to come to NZ but can't because of Covid. Luckily, Rainey has managed to do a deal with an apple grower in Hawke's Bay, who had a group of 53 Filipino workers who were available and has employed them instead.

"They are a great bunch of people who have fitted in well," he told Hort News. "They didn't sign up to pick asparagus but they are grateful for the work and we are very grateful to have them."

A feature of Mangaweka Asparagus is the modern accommodation block that has been built specially to house a workforce of up to 60 people. Rainey says there was an obvious lack of rental accommodation locally and part of the Government deal of having RSE workers is that they could not effectively take houses off Kiwis. The accommodation block includes a kitchen and lounge and all the mod cons.

Rainey says the company has accepted the idea of providing accommodation for the workers and says there is a major advantage in having all the workers here on site.

"So that's a win-win and we have set it up to a high standard to make sure they are comfortable and they want to come back here in the future."

Plenty of Challenges Ahead

The difficulty of sourcing labour, the lack of an export outlet and rising costs are all putting pressure on asparagus growers and other enterprises in the horticulture sector.

Sam Rainey told Hort News for the asparagus industry to remain profitable - particularly because of labour costs - it has to look at labour-saving technology both in the field and in the packhouse.

The Asparagus Council, the Ministry for Primary Industries and a company called Robotics Plus, based in the Bay of Plenty, are working on a four year programme to develop a mechnaical harvester.

This is in the early stage of development and is based on the work done by a previous prototype. Rainey says they have sorted out the vision technology of the machine.

"The next bit is to get it to cut the asparagus spear to length of the customer's specification and discard any unsaleable spears. If it could do that, it would be a huge plus," he says.

But it's likely to be some years before the technology is developed to a stage where it can replace the clever eye of the human picker.

In the meantime, Rainey says the industry will continue to rely on the RSE scheme and somehow attract more local people to work on the land.