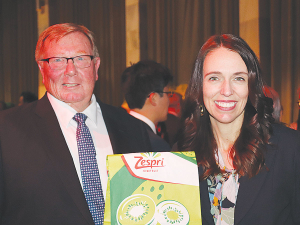 More than 200 people gathered in the Banquet Hall in the Beehive in what Zespri described as a 'thank you' function for all those who had contributed to the success of the industry in the past year.

Diplomats rubbed shoulders with parliamentarians of all hews, along with government officials, primary sector leaders and a fair sprinkling of Zespri staff, growers and media.

Prime Minister Jacinda Ardern described the kiwifruit sector as brilliant and one that goes from strength-to-strength despite having to deal with the added challenge of the pandemic.

"If you'd told me at the start of the Covid-19 pandemic that we'd been standing here tonight with an economy that is back to pre-Covid levels and with the kind of export results that you have produced, I would have found that hard to believe," she told the gathering. "But it has been achieved and with shear hard work. I want to applaud you for all the work that you did for NZ."

Ardern noted the growth in kiwifruit exports in the past three years and the benefits that this returned not only to NZ, but to the various regions around the country.

She said the growth has not only been in the Bay of Plenty but has also extended north to Auckland and the Far North, and south into the Eastern Bay of Plenty to such places as Opotiki and down to Gisborne.

"What is also so exciting in the increasing growth by Māori in kiwifruit.The kiwifruit sector represents the highest sector of Māori ownership in any area of horticulture," she says.

Finally, the PM pointed out her personal connection to the sector. She says her grandfather was one of the early kiwifruit growers - who later went on to grow Nashi pears and avocados.

Agriculture Minister Damien O'Connor also praised the kiwifruit sector saying it had done, and continues to do, an outstanding job. He says Zespri's goal of earning $4.5 billion in exports by 2025 is a brilliant target and one he believes the industry will achieve.

"Kiwifruit offers the finest nutrition to some of the world's most discerning customers and they are prepared to pay a premium for it.

"We'd like this to be a model that is rolled out for all the other primary sectors," he says. "It has been a very successful year and I would like to acknowledge the commitment of everyone in the kiwifruit sector - from those who grew the fruit and picked it to those who are out in the market selling product."

O'Connor also praised the fact that innovation continues to drive the kiwifruit industry.

He says the sector is always coming up with new fruit and attractive options and that other sectors should emulate such initiatives. He also praised the way the industry has been able to attract people to work on its orchards despite the challenges.

Zespri chairman Bruce Cameron says the past season has been a long one but noted that the industry had coped well - despite the challenges it faces.

"The market around the world is incredibly strong but faces headwinds which will have to contend with," he says.

Cameron says the world the industry operated in is more uncertain and fragile than it's ever been and maintaining relationships and building new ones is never easy. He says it is only made possible by the assistance that the industry received from the people who were at the function at Parliament.

The NZ Kiwifruit Industry By The Numbers