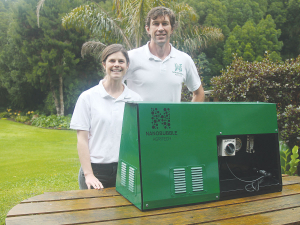 Following a decade playing at Super Rugby, NPC and Top 14 level in France, Leon Power decided to hang up his boots and put his life experiences – and a Massey University degree in Agricultural Science – to good use.

Power and his wife Lauren Oehme founded start-up company Nanobubble Agritech. Their vision is to dramatically reduce the volumes of water required for agricultural and horticultural irrigation – benefitting both farmers and the planet.

“Having worked at my uncle’s company which was selling nanobubble technology for hydroponic growing, we consistently saw significant increases in growth rate and yield,” Power says.

“I also observed larger, healthier root masses – alongside better control of Pythium and Phytophthora. I thought, why not use this technology in soil?”

Launched in September 2020, the company’s focus is building systems for larger scale, soil-based horticultural and agricultural crops that are easily integrated to existing irrigation infrastructure. The technology injects high levels of oxygen into irrigation lines, using nanobubbles as the carrier medium – improving water use efficiency and enabling greater production.

He says increased water use efficiency occurs because adding oxygen nanobubbles changes the way water moves through the soil profile, resulting in less moisture loss from percolation. By creating optimal soil moisture levels, improvements can be seen in plant performance, primarily due to getting more oxygen to soil near the rootzone.

A unique system sees water pass through a module to transfer air or oxygen gas to water as nanobubbles with an average diameter <100nm (around the same size as a corona virus or 10,000x smaller than diameter of hair). From here, it is delivered to an existing irrigation system in-line or to a water tank.

Essentially farmers can grow more with less water; easing the problems of water allocation – caused by increasing orchard development in key growing areas and the effects of climate change, Power explains. “Tightening legislative environments and – ultimately – the threat of water unavailability is something that can be addressed with more effective water use.”

With early stage operations focused on feasibility, several trials across pasture and apple orchards were undertaken at Massey University with funding from Callaghan Innovation.

“Our first season trials delivered preliminary results that included strong increases in water use efficiency, faster growth rates and improved yields,” Power says. “There was also improved general chlorophyll content and photosynthetic rates. This suggests a positive impact on the overall productivity and quality of the crop, so we are looking to replicate and expand these trials, to test the nanobubble impacts further.”

The team is focused on establishing commercial on-farm trials to validate the results at scale, noting that existing nanobubble generators aren’t cost effective for use in large scale soil-based cropping.

“This meant we had to develop a system to transfer the oxygen nanobubbles effectively in typical commercial kiwi or apple orchards, with a reasonable payback period.”

Supported by Sprout Agritech accelerator programme, the collaboration is helping the entrepreneurs better understand the environment they’re operating in – as well as challenging their thinking around bringing the system to market faster.