Getting the lowdown on soil compaction 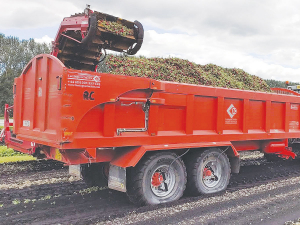 While farmers and growers are familiar with ground compaction and soil damage, most attempts to alleviate the problem centres around the tractor - usually fitting larger section tyres or reducing pressure.

Over in the UK, Feltwell Growers, part of the G's Group - the country's largest family-owned fresh produce supplier - has undertaken demo trials to reduce the amount of soil damage at its 5,000ha base in eastern England.

"We are effectively farming below sea level, so the ground can get wet very quickly. It makes it difficult for trailers to travel or manoeurvre - especially with typical loaded weights of up to 19 tonnes," explains Scott Watson, who manages the company's radish division.

"When we started to look at the problem of alleviating soil damage, we assumed that the only way forward was to look at trailers fitted with track systems. Richard Larrington explained that fitting such units would see a big increase in trailer tare weights, not to mention a large increase in cost. With this in mind, he encouraged us to look at CTIS and the latest low-pressure tyre options."

To test the suitability of such a set up for the area, two 180hp tractors were coupled up to identical Larrington, tandem axle trailers. These were loaded with ten tonnes of stone, aiming to cross a wet area of a paddock. The first was fitted with standard tyres inflated to 4.0 bar, while the second was fitted with the Michelin VF option, but only inflated to 1.0 bar.

"While the standard tyre trailer became bogged very quickly and had to be rescued by an extra two tractors, the Michelin-equipped unit sailed through the wet patch with minimal damage," Watson says. The test resulted in two exact same spec trailers arriving shortly after, with a further two currently on order.

"The CTIS allows us to operate at pressures up to 7.0 bar on firm dry ground or on the road, while we can drop down to 1.0 bar in soggy areas, easily achieved in around 90 seconds," Watson adds.

"We really have been blown away by the results, so much so, that other divisions with the group are now undertaking their own trials."