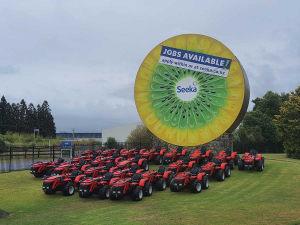 Further confirmation of this upswinf is the placement of a large order for 45 specialised tractors. The bulk is designed for Seeka, a cooperative based in the Bay of Plenty that achieved revenues of $237m in the 2018/12 season.

Traditionally this was the domain of old, locally-modified tractors that were difficult to operate in the confines of the orchards, often without power steering and with limited stopping power. The move to more specialised machines was driven by the need for efficiency, but also the recognition by many orchardists that they needed to upgrade their health and safety requirements to meet current standards.

"A lot of the older tractors are pulled out of storage for a short period of work every year," managing director, Stuart MacFarlane says.

"In a lot of cases, they are poorly maintained, only two-wheel drive, have single ratio gearboxes, no power steering, little or no braking and in a lot of cases, not having the towing capacity required."

The new low-profile tractors are fitted with 50hp Yanmar 2.2 litre four-cylinder engines mated to a dry-clutch transmission with 12 forward and 12 reverse speeds.

They have four-wheel drive and equal-sized wheels with 31-15.5 R15 low-ground pressure tyres. Combined with a low centre of gravity and four-wheel braking, the tractors offer a towing capacity of 1500kg.

The full, cast chassis features a central articulated joing between the engine and transmission allowing 15 degrees of longitudinal oscillation, which helps maintain traction and grip.

Featuring a foldable roll bar, a low engine hood height of 1050mm and a standard seat height of 820mm, the machines are said to be ideal for kiwifruit operations. However, for those with lower pergolas or low hanging vines, a modification can get the seat as low as 690mm.

"The equal-sized wheel layout, combined with the central pivot, allows safe operations at angles of up to 38 degrees," says McFarlane. "While the 60:40 front to rear weight distribution and diff locks mean these tractors can safely cope with steep inclines, sidling land or tricky situations."

Antonio Carraro by the numbers: