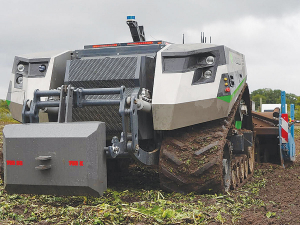 Dutch company AgXeed will be the first to enter series production of autonomous field robots with its aptly named AgBot.

While global player John Deere and German manufacturer Horsch are believed to be well down the track with autonomous field robots, it looks like Dutch start-up company AgXeed will be the first to enter series production with the aptly named AgBot.

Power is provided by an off-the-shelf Deutz four-pot churning out 156hp, this in turn is mated to a generator that powers an electrical driveline at speeds of up to 13.5km/h.

The AgBot is also able to power implements with up to 136hp available through 700-volt electrical connections. An example is the Imants rotary spader/subsoiler, which was converted to electrical drive for field trial in the 2020 European autumn.

Offering infinitely variable track width from 1,800 to 3,000mm, the robot can carry up to three tonnes out front and upt to eight tonnes on the rear linkage and hydraulic flow of up to 80 litres per minute. Implement mounting is via a largely conventional three-point linkage, although implements are folded over the top of the unmanned machine for transport.

To move between farms a separate twin-wheel axle and drawbar assembly is used to move the unit.

A second unit is about to hit the paddocks of Europe in the coming weeks. This time it is configured with a 100kW (125hp) electrically-driven PTO system that will allow the use of standard implements like power harrows or rotary hoes. This unit, which will be followed by a third later in the year, will also feature independent track suspension.

By that stage, the company says the AgBot will be available with interchangeable tracks with a maximum width of 910mm.