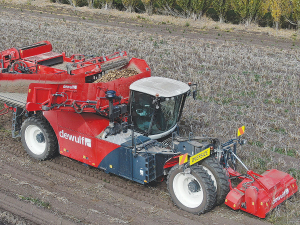 Despite measuring nearly 13 metres in length and tipping the scales at around 16.5 tonnes, the latest Dewulf harvester is said to be very manageable and easily manoeuvred.

With more than 40 years of two and four-row self-propelled harvester production behind them, the latest Dewulf harvester - imported by Ashburton-based New Zealand Tractors - puts that expertise to good use in the shape of the RCA 3060.

One of two, two-row machines operating in central Canterbury, it is tasked with lifting potatoes and carrots for the supermarket trade.

The 3060 is the fifth generation of harvesters based on the Dewulf R3000 Series that was introduced in 1989 as the first machine to offer a three-wheeled offset layout, combined with a gooseneck front axle/steering assembly.

Despite the machine measuring nearly 13 metres in length and tipping the scales with a tare weight of around 16.5 tonnes, it is said to be very manageable and easily manoeuvred - with the inclusion of steerable rear axle unit.

Power is delivered by a 5-cylinder Scania engine that pushes out 350hp. The machine has an engine management strategy that sees only 1,300rpm while roading and 1,600rpm in the paddock. The fully hydrostatic driveline features 3-wheel drive. All the machine's functions are powered hydraulically, allowing the operator to precisely control ground speed, alongside the speed of individual machine modules to deliver a high-quality sample.

I can produce outputs of 4-5 ha a day and harvesting units can be quickly changed to cover different crops.

The quality starts out front where a haulm topper, featuring extensive use of Hardox steel, also offers automatic depth control, side-shift and is configurable for multiple crops.

On the top of the machine, a pick-off table allows room for four sorters, with an easily accessible keypad allowing control of up to eight cleaning related functions.

Once sorted, the crop passes to an 11 cubic metre/7 tonne capacity bunker that can be unloaded statistically or on the move bia a 1,600 mm wide elevator.

At the operator station, comprising a Claas-sourced X10 series cabin, comfort and quietness are to the fore.

The main hydrostatic control lever features five programmable buttons for key functions. With regards to machine set up, a single button press allows the operator to configure the machine for differing harvesting situations - such as dry, normal, wet or cloddy - calling on pre-programmed configuration of the individual harvesting and cleaning elements.

The operator also benefits from twin, 10-inch monitors, alongside eight camera feeds from key areas of the machine. In the event of a problem in any area, the operator is warned audibly, while a full screen feed of the affected areas is also displayed.</p?

A wide range of options allows these machines to be configured for the prevailing conditions, with a list that includes a track assembly for the rear left side of the machine, automatic greasing and autolubrication for the drive mechanism in the bunker hopper.

Offering easy access for routine servicing and high grade componentry from key suppliers such as SKF and Sauer-Danfoss, the machine is said to offer low running costs and an extended service life.