A Nation is now behind running the National Fieldays 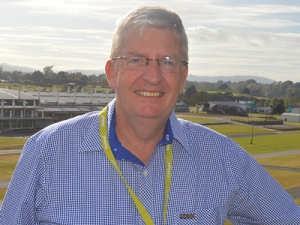 New fieldays boss Peter Nation has had a long time involvement with the event.

Peter Nation's links to the National Fieldays started with his visits as a teenager from Rangitikei, Manawatu.

On June 15, Nation will mark his first National Fieldays as the chief executive, another highlight for him.

When the New Zealand Fieldays Society needed money for the first pavilion, it turned to ANZ's Waikato banker, Nation.

He helped the society get funding from the bank, a key sponsor of the Fieldays, and became ANZ's representative on the Fieldays' agriculture sub-committee. Eleven years ago, he was asked to join the society's board.

Nation says in October that when former chief executive Jon Calder resigned, he decided to put his hand up for the job.

"I went to the president and said 'I have done 11 years on the board and am now ready for a new challenge and to add new value to the organisation'," he told Rural News.

He then stepped out of the recruitment process while an extensive search by national recruitment firm Farrow Jameson drew 67 applications.

Nation stepped into the role in early March.

He is keen to grow events at Mystery Creek, the sprawling event centre owned by the NZ National Fieldays Society.

But Nation wants the flagship four-day National Fieldays to stay true to its founding principles of bringing country and urban people together.

"We are focussed on keeping it real to its roots," he says."When six people founded this organisation 48 years ago the objective was to bring town and country together and advance agriculture.

"We are careful to maintain this focus; I was quoted as saying in a media interview that under my watch there will be no ferris wheels or candy-floss.

"I deliberately said that, not an insult to anyone... I was merely trying to distinguish Fieldays from an A&P Show or an animal show. "We are not that; we are focussed on innovation."

The 2016 Fieldays innovation centre has attracted a record 70 entries. It brings together investment brokers, accountants, IP providers and solicitors to help new entrepreneurs showcase innovations. The assistance doesn't end there. The incubator programme, for those who exhibited in the innovation centre last year, helps with commercialising concepts.

Nation points out that electric bikes, now in production, were first shown in the innovation centre at the Fieldays.

"People who get their innovation here are judged obviously and then exposed to the world market; we help them by bringing partners together and taking them through the commercialisation channel. No one else does that."

Nation, who served as the national sales manager for Gallagher before taking up the new role, says the Fieldays is much than people pushing brands from their sites.

It's a shopping experience, a place for people to meet, and a major platform for innovation and to compare products and prices.

For someone looking to buy a tractor, every NZ-distributed tractor brand is at the Fieldays.

"We have a dairy themed area; people can go to one area and see the dairy machinery and compare products.

"You can't do that easily in a small rural town or easily on the internet; you can research different companies but you can't touch.

"We humans buy things based on smell and touch; the amount of stuff the Fieldays brings in one space is not only for exhibition, it's for an experience."

Highlights of this year's event include the ag art competition, rural bachelor of the year, Kiwi's best kitchen and a new education hub showing career development in the ag sector.