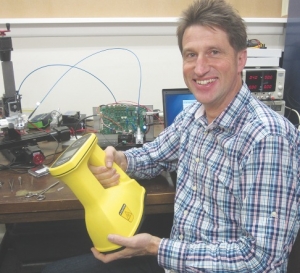 A SOLUTION to a meat industry headache is offered by Christchurch company Veritide.

“We’ve proven the concept of our real time, non-contact bacterial detection technology in the meat industry,” says chief executive Craig Tuffnell. “We have a known problem and a huge opportunity to provide a solution for meat companies and food processors that need to identify and manage their pathogen risk.”

Tuffnell says Veritide has worked with ANZCO to prove its concept, and it and other food processing companies will assist prototype development, testing and validation, and as an actual product is taken to market.

Veritide’s technology, from the University of Canterbury, was in 2006 was at first used for ultraviolet light and florescence reading to detect anthrax spores. Then in 2011 Veritide and Powerhouse Ventures, an intellectual property commercialisation company, began looking at bacterial identification and contamination in the meat industry.

An animal’s carcass is essentially sterile as its pelt is pulled off. But faecal and other bacteria can come in contact by touch or air-borne means, resulting in potential spoilage and meat rejection.

With increasing quantities of fresh, chilled meat, zero faecal tolerance at such borders as the US, and reduced shipping speeds, the potential grows for meat to be rejected.

Such meat company assessments and tests, where swabs are also being taken from surfaces within a processing plant, cost a lot of time and money.

“Those swabs are pretty hit and miss, and even with hygiene standards that match hospital operating theatres, meat companies find it difficult to detect and remedy bacterial contamination issues,” says Tuffnell.

“What Veritide’s hand-held scanner and box of tricks offers is real-time, non-contact detection of bacteria, on both a carcass and on surfaces. If there’s a positive result, a food manufacturer can immediately deal with the issue, improve processes, isolate the carcasses.”

Veritide says it has proved its concept, and will finish its prototype development and testing by November before taking a saleable portable device to market – with potential for being a “game changer,” Tuffnell says. “It addresses a bacterial-presence problem that importing countries are [going to tolerate less and less]. While we intend concentrating on meat processing first, other industries such as poultry and shellfish share exactly the same bacterial detection and mitigation problems.”

It's important to have at least one cooperative in the meat industry, says a senior lecturer in agribusiness management at Lincoln University.