Californian farmer shows how to add value to milk 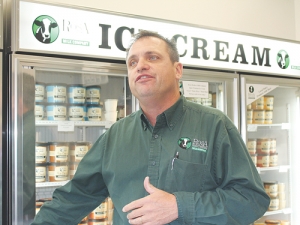 A Californian mega dairy farmer who has opened his own plant in the nearby town to process and sell fresh, glass-bottled milk and make ice cream says he can add $100 to the basic milk price with his premium products.

That’s $100/cwt (1cwt = 0.0508 tonne) – the basic milk price currently is $13-14/cwt. Noel Rosa of Rosa Brothers Milk Company says his glass-bottled whole milk adds $50 more but with flavoured milk and premium smaller volume product he can get up to $100 more.

About five-six years ago he says they were looking at building another free stall barn – adding about 700 cows to his 5000-cow operation. They decided instead to open their own processing and manufacturing plant with shop attached in the nearby town of Tulare. “We thought it was less of a risk.”

At the farm Rosa Brothers milks 5000 cows and has planted about 242ha of feed crops. The family has had the farm for 60 years but started the manufacturing operation two and a half years ago. They use about 20% of their own milk for their glass-bottled milk and ice cream products and they are bottling the milk from about 200 cows. He would use all his milk if the operation grew large enough.

They offer whole milk, non-fat milk and lactose free. They also have flavours such as chocolate, strawberry, vanilla, root beer, and orange and they put whole milk and chocolate milk into smaller containers to sell at donut shops and bakeries and similar. The bigger sellers are chocolate and whole milk which are “neck and neck” followed by strawberry.

“A lot of people liked the chocolate but they said they were lactose intolerant and could not digest the milk so we started making that in lactose free. In the United States lactose free is a growing segment in milk. Overall in the US fluid milk has been on a 30 year decline but there are certain growth sectors in fluid milk: glass bottle, lactose-free and organic are growing.”

They do recyclable glass bottles and only to sell to outlets prepared to collect the bottles for Rosa to recycle. With the leftover cream from the non-fat milk they started making ice cream.  Flavours include vanilla, chocolate, rocky road,  cookies and cream, coconut, chocolate and almonds, chocolate chip and honey nut – they get local almonds and honey directly from someone who has the bees – pistachio, French cream, coffee and chips, strawberry and banana. The flavours are all natural using real fruit, no artificial colours. Eggnog ice cream has not been a big mover but may be around Christmas. Other dairy farms make artisan cheeses so they sell those also and some other local food products.

They sell at their own shop, deliver in the local area up to two hours away and have a trailer they take to events.

They are not organic but try to do a few things a bit more naturally so they can claim they have more natural milk. “Our thing is more being fresh and natural.” They do not sell raw milk. “California has a lot of attorneys and lawsuits so we’re not interested in raw milk,” he joked. There is a huge demand for raw milk in the state but he is not interested in the risk.

They process about one tanker load of milk a day. They sell to young people who are single or just have one child and want something more natural and better tasting or older people who don’t buy much milk but when they do they buy for the quality. They buy it for their grandkids. And they have people who are worried about the environment who like the use of glass bottles. Buyers are not the blue collar workers who have four kids.

Water options for a dry future

As we enjoy the warmth of spring, wine growers everywhere will be turning their thoughts towards the growing season, and water availability will surely be high on the discussion list.

Drought on the US West Coast is tightening its grip on California agriculture, squeezing 30% more workers and cropland out of production than in 2014, according to the latest drought impact report by the UC Davis Center for Watershed Sciences.

US going nuts about milk prices

From Kentucky family farms to Californian ‘mega dairies’, there is one thing on the mind of US dairy farmers – milk price. In California this is driving many to nuts.