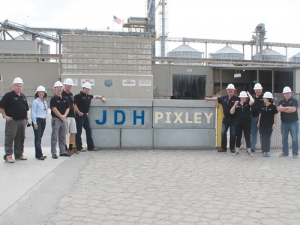 And with cows milked around the clock in the region, EJ Heiskell’s feedmill works 24/7 in eight hour shifts and never shuts down – even for Christmas. It is pushing out about 100,000 tonnes a month of feed to the Central Valley region only.

The company is in nine states and has 420 employees nationwide but Pixley is the biggest. Head of quality control Melvin Martins says they feed millions of dairy cows off the mill and that’s only into the Central Valley area.

Dairy News visited the site with a group of mostly Southland dairy farmers and Alltech NZ representatives as part of a tour of the Central Valley region organised by Alltech’s California representative and dairy farmer Jessica Lawrence. Alltech products are used in some mix formulas.

Martins says their plant alone feeds millions of dairy cows and that’s just in the Central Valley. Feeds include corn, canola and almond husks – in increasing supply because of a huge push to plant almonds and other nuts throughout the region for export to China.

Corn comes from Nebraska, Iowa and Minnesota by train every four days and must be unloaded in 15 hours.  They can unload 800t in eight minutes but Larson says that’s “kinda slow”. In Texas they are must faster, unloading a 100 cars of canola in nine hours. “In Texas they do everything fast,” he jokes.

Eight gigantic silos can each hold 3000t of corn. The corn and canola are railed in, other feeds are trucked in.

They can mix up to 2000 formulas a day in accordance with customer requirements and the control centre has a fulltime nutritionist with a PhD in the discipline.

Calf pre-mix formula can be supplied to farms in containers, costing US$400-600 a tonne depending on the mix required by the customer, says Todd Heuer, calf specialist.

Martins says trends come and go in nutrition and can be determined by the nutritionist. PKE has come and gone also but choices are also dictated by economics. And though it’s “trash for humans, it’s feed for cows,” he says.

With big returns and demand from China, there is a huge push throughout the Central Valley to plant nut trees; by-products such as almond husks are now used. One nutritionist told Dairy News that the husks are very good feed for dairy cows, containing 35% sugar.

Baking waste is also ground up; it is not their highest selling product but it is available and is used to feed dairy cows, says Martins. Cotton husks are fibrous and are said to help the rumen in calves – it is mainly used in mixed formulas.

Neighbouring JD Heiskeill’s Pixley ethanol plant takes 1500 tonnes a day of corn. Larson says ethanol was booming five years ago especially in the Midwest, but the economics did not stack up and plants shut down, some of them half built.

When the boom was on the price of corn went “through the roof” and the ability to feed animals was coming under threat. The situation has now stabilised. The federal mandate on ethanol has expired and the price of oil has dropped.

A dairy operation next to the ethanol plant pumps its effluent to the plant for extraction of byproducts such as methane, CO2 and clean irrigable water.