From the Coast to the back of beyond! 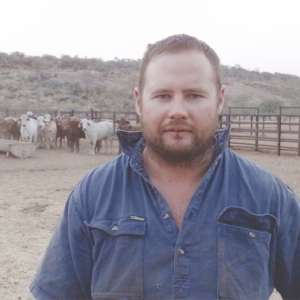 Scott Devescovi, from West Coast NZ to the Northern Territory.

CHANGING FARM jobs is usually no big deal other than meeting new bosses and learning how they farm.

Scott Devescovi’s path, from attending school in Buller, contract milking then share milking on the West Coast, with spells away, has been an interesting and contrasting one.

“I started milking cows while I was still at college and went full time when I left. Sometime later I saw an ad for a cattle musterer on Kenmore Park Station near Alice Springs and I went there for two years.”

Mustering was done on bikes assisted by helicopters. They mustered only cattle; there are no sheep in the Northern Territory because of Johnes disease.

He returned to the Coast where he herd managed and then contract milked for a season and at age 27 went back to Australia, this time to Napperby Station where he has been for two years.

The station is 220km northwest of Alice Springs in the Northern Territory. Size has another meaning here: the station is 5000km2 (500,000ha), about half the size of Fiordland National Park.

The station is owned by Roy and Janet Chisholm who live and work on site. Roy is a former chairman of the Northern Territory Cattlemans Association. The back boundary is a two hour drive from the homestead and there are 27 water points. To check them all – the ‘bore run’ – entails driving 500km. The bore pumps are powered by solar or diesel.

Cattle numbers are 15,000, mainly Santa Gertrudis and some Brahman and Droughtmaster, a breed developed in north Queensland by crossing Brahman and Beef Shorthorn. The three breeds suit the higher temperatures. “The highest temperature while I have been here was 45oC,” said Devescovi.

Bulls are out all year and there are usually two musters a year where all new calves are marked and recorded.

Stock from the station go in one of two directions: finished bullocks up to four years old are sent to Port Augusta, near Adelaide, for slaughter, a journey of 1700km. Good two-year-old steers go to Darwin for export to feed lots in Indonesia, sometimes with young ‘mickey bulls’ that missed being marked at mustering time.

The station is divided into about seven paddocks with seven sets of stock yards situated to reduce stock movement for drafting. “There are a lot of native grasses and buffalo grass.” Is there much rain? “Not a lot only 11 inches (275mm) annually.”

They regularly have to cull camels, abandoned in the outback during the expansion of roads and train tracks. They increase in number and eat valuable grass.

“They also are a problem when they walk through fences, sometimes taking out a km of fence just like that,” says Devescovi.

The farm workers eat a lot of camel meat usually from younger animals.

Staff are five permanents and part-time workers for mustering and others from the local aboriginal community when needed.

Napperby Station also has working holiday experiences – www.napperbystation.co.au – where backpackers or passersby can join the staff for as long as they wish.

“I went for the experience as I have always enjoyed working with livestock and I still get an adrenalin rush with these animals. We get the odd few mavericks but our cattle are reasonably quiet as they see us around the farm a lot and I just love the remoteness of living out here.”

He comments that that you learn a lot of skills as if something breaks you have to fix it as it is a long way from town for someone to come out.

Devescovi still likes working with the big cattle numbers but yearns for some West Coast rain on Napperby.

The Government is giving an extra $400,000 to help West Coasters recover from the devastating March floods.

Bucking public perception of dirty dairying – fanned by environmental groups and mainstream media reporting – West Coast dairy farmers have played a big part in cleaning up the biggest waterway in the region.

Payout too hard to predict

Westland Milk Products chairman Matt O'Regan says it's very hard to predict a payout price given the volatility of the international market.