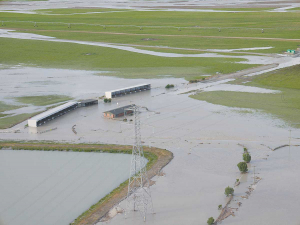 An aerial photo of flooding at a Rangitata Island farm. Photo: Supplied.

Major slips, which some estimates say will not be cleared before the end of January, cut State Highway 6 near Hari Hari on the West Coast.

Westland Milk Products chief executive Toni Brendish said that because of the limited times of access to re-opened roads and the distances tankers need to travel, scheduling for full pickup from farms affected by road closures was “still a work in progress”.

“We are working closely with Civil Defence to resume full pickup as quickly and as safely as possible,” she told Rural News. “We’re communicating with farmers on an individual basis to let them know when we can get to their properties.’

On the East Coast, the Rangitata River burst its banks, closing State Highway 1 and the inland route bridges for several days.

The worst affected farms are on South Canterbury’s Rangitata Island, an area of lush farmland bounded by the main North Branch of the Rangitata River and the normally dry South Branch, between State Highway 1 and the coast.

Nearly a week into the emergency, both branches were still flowing and Rangitata Island remained extensively flooded, with the water only slowly receding.

Michelle Pye, director of South Canterbury Pye Group, said the group has four dairy farms on Rangitata Island Road, which runs from the highway towards the coast between the two branches. One of the farms had knee-deep water through a house and through three other staff accommodation units.

“We’ve pretty much got a river running through some of the farms and extensive damage to pastures and tracks and fencing,” Pye told Rural News.

She said irrigation and stock water systems had also suffered and one tanker track was demolished. One neighbour’s irrigator was turned upside down.

Other Pye group properties affected included a potato crop and a big grazing block carrying their young stock, which was cut off by floodwater.

With the farms cut off by road, the Pyes got their farm staff out by helicopter on the Saturday (December 7) after the river first breached. They lifted them back in on Sunday to feed and milk the cows.

“The current breach is running down between the two bridges and there’s a lot of water running though there. Until they can stop that it will be hard to quantify the damage.”

He said since irrigation came to the district, water tables were higher in the irrigation season, which meant there was nowhere for the water to go.

Adams, who farms in the foothills near Fairlie, said it was a “phenomenal” storm in the Rangitata headwaters.

“There’s a lot of older folk saying they’ve never seen a thunderstorm like this. It went all night,” he told Rural News.

Adams said rural professionals were now calling on farmers to see what their needs were, which was the appropriate response at this stage, rather than overwhelming them with offers of help when they’re still trying to quantify the need.

Agriculture Minister Damien O’Connor declared a medium-scale adverse event for the South Canterbury district, making up to $50,000 available to the Trust to support farming communities.

Adams said he would like to use the funds to help each farm call on expert advisers to put together a recovery plan.

The Trust would also probably have a community event at some stage “to put on a beer and barbecue” for the affected families.

He says the ferociousness of the rain took many farmers by surprise and some farms are still working with intermittent power and closed roads affecting milk collection. About 22 farms are affected in the Rangitata and another 40 farms on the West Coast.

“As the flood waters begin to disappear, the full extent of the damage and the clean-up will be seen,” said Finch.

“Some farmers will be thinking about milk that cannot be collected. Every situation is different, and we recommend farmers contact their supply company and local council for advice on the best way to manage uncollected milk.”