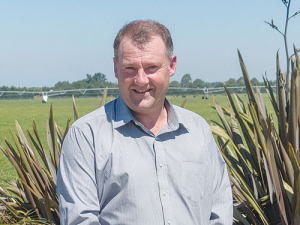 The dairy industry is full of passionate people -- farmers who take ownership of their problems and want to be recognised for their good work, says Dairy Holdings chief executive Colin Glass.

Recently elected to the board of DairyNZ, Glass says it is time for DairyNZ to take a lead, tell its story and make people aware of what it is doing.

Glass said dairying has become the country’s whipping boy over issues such as farm intensification, animal welfare and health and safety.

But for farmers, dairying is more than just a job: they are part of their communities and take their responsibilities seriously.

“Dairy is such a big part of the NZ economy now it can’t operate in isolation as we may have done in days gone by.

“What I, like most farmers, was shocked about was how dairy had greater attention in the lead-up to the election for all the wrong reasons.”

Glass said DairyNZ must speak for the industry in ways the commercial players like Fonterra and LIC cannot.

As chief executive of Dairy Holdings, a company he has headed since its inception in 2001, Glass runs the country’s largest dairy enterprise.

With his wife Paula and two daughters, he also farms in his own right, with a dairy farm and two beef rearing and finishing properties near Methven, Mid-Canterbury. He is also involved in several other agri-businesses.

The Dairy Holdings office is 100km away in central Timaru, but the Methven district is where Glass was born and raised, on a dairy farm owned by his father and uncle.

On the day Dairy News caught up with him on his dairy farm, a contract milker was taking the 650 cows through their afternoon milking.

Glass has owned the farm only two years and says his modernisation efforts so far run to pivot irrigation and automated cup removers in the old herringbone shed.

He had always intended going farming but, growing up in the late 1980s, when farming was relatively unprofitable, chose the indirect route, studying at Lincoln for a BCom in Farm Management, followed by a post-graduate Diploma in Accountancy and Corporate Finance.

Following a period with Price Waterhouse, an overseas secondment to Singapore, and an exchange scholarship to UK, Glass became the chief financial officer of Tasman Agriculture, Dunedin, in 1997.

Those were the early days of corporate farming in NZ. Tasman was at the forefront of dairy conversions, buying up sheep, beef and cropping farms and expanding quickly.

“It was quite a baptism of fire for me, moving into that role,” said Glass.

Back to basics after price crash

In 2001, Tasman’s majority shareholder, Brierley Investments, moved to sell its dairy interests, as did the other big farming corporate of the time, Dairy Brands.

“So they’d all looked at farming as being all about property development and less about farming. They really were speculators; they were property developers, that was their business,” said Colin Glass.

Most of the Tasman Agriculture farms north of Dunedin were taken up by investors Allan Hubbard, Alan Pye, Colin and Dale Armer and a group of three Americans, so beginning Dairy Holdings.

“Effectively with those farms they got me as well; I started as general manager in that business in 2001,” said Glass.

In the first year, Dairy Holdings had 30 farms and produced 7 million kgMS. Then came the 9/11 attack on the World Trade Centre and a crash in international milk prices.

It was “a pretty wild start” for the company and it brought the realisation they had to make sure it had good profitable systems. The key was efficient pasture management and utilisation, said Glass.

“It took that low payout year for us to focus on what we did; that was a push back to pasture management and re-laying the basics. The interesting thing is that in the $3.63/kgMS year for Dairy Holdings we made more money that season than we did in the $5.30/kgMS year the year before.”

A high-payout environment allows slack into the business, he says.

“Your grazing residuals are lifted, lots of creep takes place. Out of that we learned a few things with Dairy Holdings. You always want to keep yourself under pressure.”