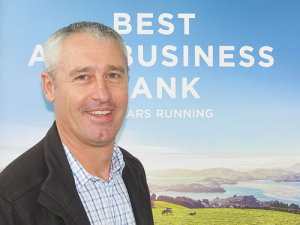 Mark Hiddleston told Rural News that the pace of change is now faster and is matched by the greater expectations of the community and consumers. He believes an environmental plan will soon rank equally with getting a LIM in the purchase of a farm.

“We as a financier will need that and it will become normal. Early adopters are now already there.

“But a few wakeup calls [sounded] during some sales and purchases around ‘gypsy’ day, and those who didn’t have [an environmental plan] were scrambling a bit.

“The need for an environmental plan hasn’t become a compulsory requirement yet, but you can see where it’s going.”

People are starting to realise the ag sector must change to meet the sustainability requirements expected of it, Hiddleston says. The pace of change in consumer expectations has leaped ahead of the regulatory environment.

“I don’t think the regulatory environment has kept pace with the consumer. That catch-up needs to take place to be able to demonstrate to the consumer with facts – based on science.

“You also need to identify those who are laggards in the farming sector and, sadly, they will need to be punished. You can’t just have this ‘she’ll be right’ approach.”

Hiddleston says a lot of things in society are consumer-led and this will be a significant driver in NZ’s primary produce sector and the need for farmers to recognise this.

“There is a realisation that our farmers are part of communities and communities need to be proud of the activities taking place in the regions [farmers] operate in,” he adds.

“But farmers also need to realise that while they haven’t done a bad job, the bar has lifted from a consumer and community expectation point of view.”

In his experience, Hiddleston says, very few farmers have deliberately gone out of their way to do the wrong thing. But they have probably underestimated the pace of change and not had the clarity to do things the way they should.

“When you give that to them they are quick to say, ‘well how do I get there’? You don’t tell farmers what to do; you give them a problem and ask them to solve it,” Hiddleston says.

Volatility a reality in today’s farming

In the last five years, Hiddleston says, volatility has increased, in the market and in climate conditions in New Zealand.

Now there is no such thing as an average season.

“Each season now you can expect a flood, a drought and commodity-cycle volatility all in the same season. That will re-base some of the capital structures and the expectations on profitability, because volatility is ultimately a cost,” Hiddleston explains.

“Precision farming will help, and people will do things differently to manage risk; this may be interest rate management or hedging the milk payout to take out some volatility. However, farming is still a very viable and bankable sector.”

The biggest challenge for the agri sector, says ANZ’s head of agri Mark Hiddleston, is coordination and willingness to spend on advice and planning.

Some farmers get it and are starting to invest big in R&D and technology.

“They also understand scale and their ability to measure and monitor and articulate their story,” he told Rural News.

“The issue of provenance is getting real traction with the end customers. But I am worried about those who may be left behind. Spending money to get help is not something they do naturally.”

Hiddleston believes this approach needs to be taken to make the sector more bankable in the future.