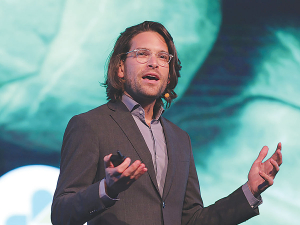 Globalisation is the only way to feed 9.6 billion people by 2050 with a healthy diet on a healthy planet, says a global food expert.

And there is no vegetarian wave moving across the planet, he says.

Demaio spoke at the Produce Market Association A-NZ’s HortConnections conference in Melbourne, attended by Rural News. His words have implications for Australian and NZ agriculture.

Demaio says there is a discrepancy worldwide in the quality and quantity of food we can grow on a hectare of land -- partly about “climate and access to water”.

“We need to think about that. We need to be growing food where it is going to grow most efficiently.”

Demaio disputes any obsession with winding back globalisation. “In fact the only way we are going to feed 9.6 billion people is to dramatically increase trade”.

Countries must get over the idea of food sovereignty or the historic need to produce enough food for an entire country.

“Some countries will obviously be exporters, but with others we will need to strengthen multilateral relationships to ensure trust exists so that long term our global trading system will be able to feed a growing world,” Demaio said.

“It sounds simplistic, but we live on one planet, we have one global food system. Food needs to be grown where it can be grown most efficiently with the limited amount of resources we have.”

He says globally we are under-consuming fruit and vegetables, whole grains, nuts, seeds and healthy oils. But the South Asian region is under-consuming in different ways.

“We will need to increase red meat consumption by most Southeast Asians… and eggs. There is a huge investment now in scaling up egg production in Africa and the same need will emerge in the Southeast Asian region.”

The nutritional potential of eggs for the most vulnerable people worldwide needs to be realised. That includes the young, especially young women, who need animal-sourced protein in general.

A bit of meat on the side

While vegan and vegetarian numbers in Europe and North America are stable, interest is surging in ‘flexitarianism’ – a plant-based diet with some meat.

“There is no vegan wave moving across the world and everyone is going to give up meat tomorrow,” Demaio explains.

“But people are interested in the meat they are eating in a way they haven’t been previously.”

This holds a challenge to meat producers and an opportunity “because those same people are interested in paying more for quality meat”.

“How do we shift the economic incentives and levers to ensure we put more vegetables on the plate or move to farming practices that better support farmers and farming communities and give them a fair wage? Demaio asks.

“How do we take consumers with us so policymakers are able to rethink the market incentives and the fiscal policies that allow us to make that transition?”