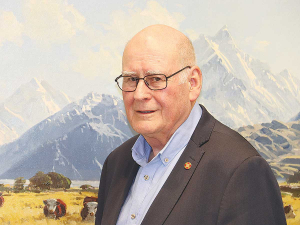 That’s the view of one of the country’s illustrious agricultural economists, Rob Davison, who recently received an award for his outstanding contribution to the primary sector.

The award goes alongside the ONZM he received in 2016 for his services to NZ’s sheep and beef sector. This latest award is well deserved for a person who has helped build and shape one of the most respected economic institutions in the country.

Davison has been with Beef+Lamb New Zealand’s Economic Service for more than 40 years, much of that time as its executive director.

He told Rural News that the red meat sector has made huge productivity gains over the years. A great example of this is the fact that the country has reduced its sheep flock since 1990-91 by 54% yet it produces only 8% less lamb.

“Similarly, our beef cow herd is down by 20%, but our steer production is up 7% - largely reflecting that half the cattle coming off sheep and beef farms now is of dairy origin.

“So, our efficiencies are way up there.

“Whatever one likes to think the primary sector it remains a huge and significant productive engine in the NZ economy,” he says.

Davison believes a lot of commentary today is what he describes as ‘industrial thinking’, which means that you define processes very precisely. But he says people have to remember that farming is a biological and climate driven system meaning the sector is dealing with huge “natural” variability and that is a great challenge.

“That biological variability is huge and this is not understood or overlooked by some people who say they are going to fix things and fix farming,” he says.

Rob Davison grew up in the Wellington region and says his interest in the primary sector was sparked by the fact that his father bought the NZ Journal of Agriculture.

He says his father probably bought the magazine for the gardening pages, but the young Davison was personally interested in the main agricultural stories and was motivated by these, and by relatives who farmed in the King Country.

"After I left school, I became a farm cadet and worked at Tora Station out on the Wairarapa coast for a bit over a year," he told Rural News.

"I then went off to Southland, Waimahaka, to learn how to winterfeed sheep and cattle on forage crops. I then worked on a Canterbury farm and then went to Massey University to gain a Diploma in Sheep Farming."

Davison went back to working on farms again, but a chance meeting with Professor Jim Stewart of Lincoln University set him on a new career path.

On meeting Stewart, Davison discovered that Lincoln was planning a new degree in Agricultural Commerce, which he completed and followed with an honours year - including a paper on trade policy among other things.

"I really enjoyed Lincoln as an older student. It was there that I was introduced to Frank Ward who was director of the then Meat and Wool Board's Economic Service and was offered a job there as a research officer," he says.

Transitioning from farm life to working in the city came easily for Davison and he has been there ever since.

He's very proud of the Beef + Lamb New Zealand's Economic Service and what it has achieved since it came into being in 1950. He says its goal then, as it still is, focuses on providing independent, authoritative, credible information to shape policy for the sector.

Underpinning its policy and sector benchmarking work is the sheep and beef farm survey.

The Economic Service uses the survey information to forecast future production and profitibility and model scenarios, which in turn shape policies in the sector - all firmly linked back to the actual farm situation.

Since he took up farming and then his role at the Economic Service, Rob Davison has seen many changes.

His own organisation is now taking account of environmental issues in their survey.

Davison says the big changes for the sector were in the 1980s when farm subsidies were removed and the sector was subjected to the ebbs and flows of the free market.

He points to the changes in land use noting that since 1990, NZ has given up 26% of its grazing area. Some, he says, has been lost to the DoC estate, QE-II covenanted land, reversion to scrub land and other native vegetation, subdivision to lifestyle blocks near population centres, viticulture, horticulture and urban development. He adds that close to a million hectares of sheep and beef land has been converted to dairy farming.

“Since the 1990s, there is now about 36% less land farmed for sheep and beef,” Davison told Rural News. “Yet the sector is in a very strong position and remains one of the fundamental engines that drive our economy.”

Davison says people are often inclined to just look at pastoral farming and forget the contribution of the downstream processing industries in the meat and dairy sectors, which again make a significant contribution to the wealth of NZ.

He says, despite Covid, the sector has performed impressively and a sign of this is that the NZ dollar has not weakened but rather firmed up during this crisis.