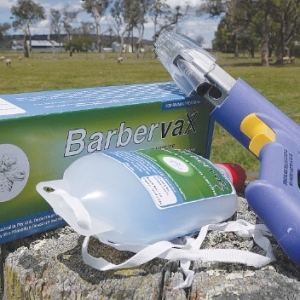 THE WORLD’S first sheep worm vaccine has been released in Australia.

Decades of research have gone into worm vaccines but to date the only other anti-worm vaccine is against cattle lungworm.

Barbervax was developed by Scotland’s Moredun Research Institute and the Department of Agriculture and Food in Western Australia. It was launched last month in New South Wales. DAF WA’s Albany laboratory makes it and NSW rural retailer GrazAg is selling it.

Sheep CRC says it will be particularly useful where barber’s pole is endemic, where frequent drenching is usually necessary to prevent sheep deaths and where resistance has slashed drench options, such as in the NSW Tablelands.

It’s registered for use in lambs, administered by five 1ml subcutaneous injections at six-week intervals during the barber’s pole risk season.

The developers stress the first two vaccinations do not provide protection, but prime immune systems so six weeks protection is gained from third and subsequent vaccinations.

It’s envisaged initial jabs will be at lamb marking, the second three-five weeks later and the third at weaning, usually with a drench to ensure existing barber’s pole burdens, and other worms such as Trichostrongylus spp (black scour worm), are removed.

Trials show the vaccine provides 75-95% protection against barber’s pole and because pasture worm burdens remain low behind vaccinated mobs, the small percentage of sheep that do not respond to vaccination do not face the worm challenge they otherwise would.

Faecal egg counts are recommended to check barber’s pole burdens when vaccine protection is being established at the second or third injection, and periodically thereafter to ensure low counts are maintained.

Sheep in poor body condition or showing signs of worms may not respond fully to vaccination and may require further support, Sheep CRC warns.