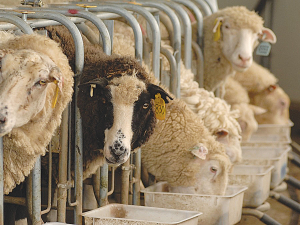 It is important to both train and transition sheep to give them time to adjust to grain feeding.

Rumen acidosis usually occurs in sheep that are introduced rapidly to grain feeding or have been grazed on stubble paddocks where there is a lot of grain left after harvest.

This disorder is also called lactic acidosis or grain overload. It is caused when grain is often used in the late summer and autumn months as a supplement to fill feed shortages in dryland situations, as well as to put condition on ewes pre-tupping.

However, just like kids with ice cream, given the opportunity, sheep will often gorge themselves if they are introduced suddenly to grain feeding.

Rumen acidosis is a two-stage process:

The lactic acid, as well bacteria and some other toxins, are then absorbed into the bloodstream causing many of the clinical signs. The high concentration of lactic acid in the rumen also kills off many of the beneficial microbial species and as a result the rumen stops working.

Sufficiently severe grain overload will eventually produce metabolic acidosis which results in toxic shock and death. The smaller the grain particle, the more rapidly this occurs, so farmers must be careful with smaller and crushed grains. Some sheep are more likely to gorge themselves on grain than others in the flock. It is these sheep that are likely to be affected first.

Prevention is most certainly the best medicine. With the lack of success in effectively treating severe acidosis, it is important to be aware of how to feed grain to sheep to minimise the chance of acidosis.

It is important to both train (get sheep to eat a novel feed) and transition (ensure their gut can digest it) to feed on grain before they are expected. Offer the animals only a small amount of grain to begin with and then slowly increase the daily amount. The rumen and its bacteria can take a long time to adjust to grain feeding.

Slowly increase the amount of grain offered to the flock over 10-14 days to adjust to a grain diet. The feeding regime should start off at about 50g/sheep/day and gradually increase to the final allowance.

Note these rates are only for mature sheep, and it is important they have access to other feed, especially roughage material such as hay or standing pasture whilst the grain diet is introduced. This ensures the sheep continue to chew their cud and acid does not build-up in the rumen.

Farmer discretion is advised and regular observation is required during this adjustment period. Feed out the grain so all sheep have access to it; this reduces the chance of a few sheep gorging themselves on the grain. This can either be done in long troughs or dribbled in a long line all over the paddock.

There are some buffers which can be added to the grain as a preventative strategy to prevent acidosis from occurring, e.g. bentonite clay or sodium bicarbonate can be added to grain based rations during the introductory phase. This will hasten the rate of acceptance and reduce the risk of acidosis but is probably only practised in trough feeding situations.