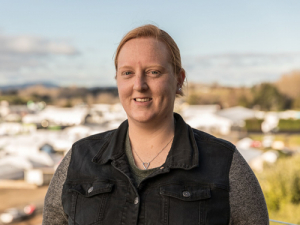 Early detection of neonatal calf diarrhoea (NCD) is top of mind for the winner of the National Fieldays Sir Don Llewellyn Scholarship.

Waikato University doctoral student Gemma Lowe’s grant of $22,000 will go towards her research into the use of infrared thermography (IRT) for the early disease detection of NCD.

She says NCD typically affects calves in their first month, and the big challenge with NCD is that by the time it is diagnosed, based on clinical signs, much damage has already occurred to an animal’s intestines; in severe cases it’s often too late to save it.

IRT is a non-invasive method of detecting radiated heat, so by assessing the thermal responses of different anatomical regions in the calves in response to disease, Lowe will be investigating the suitability of IRT as a non-invasive, automated method for early disease detection.

“The aim of this research is to develop an automated system which incorporates IRT to monitor animal health and welfare to enable early detection of this disease, before clinical signs are evident,” Lowe says.

“A system like this would hugely benefit farmers, enabling diseased animals to be isolated to prevent NCD spread and enabling treatments to be administered sooner than is now possible based on clinical signs.”

Lowe is also investigating the suitability of other physiological and behavioural responses (lying, feeding and drinking behaviours, and respiration rate) for use in the automated system.

The Fieldays scholarship was founded to help University of Waikato students do research with a specific focus on the agricultural sector.

NZ National Fieldays Society president Peter Carr says they’re delighted to award Lowe the scholarship, whose work “shows a dedication to the advancement of agriculture and the welfare of animals and farmers battling such diseases”.

Lowe has so far done four different trials investigating the suitability of IRT and other physiological and behavioural responses as indicators for the early detection of NCD.

“I’m analysing a lot of video data collected during the trials. I’ve already published and presented two papers on my research, and will be presenting more data later this year in Canada at the 2018 Congress of the International Society for Applied Ethology (ISAE): Ethology for Health and Welfare.”

Lowe, long interested in animal welfare, did her bachelor degree study at Waikato, where she completed two student placements on research of animal behaviour and welfare. She joined InterAg, Hamilton, in 2015 to complete a BSc Honours, and there decided to enrol in the PhD studies.