No drench for heavy ‘uns? 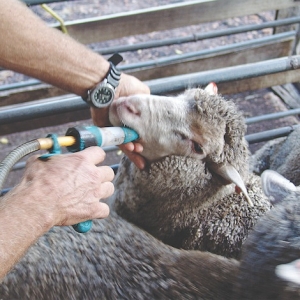 Postgraduate student Meghan Cornelius says sheep with higher body condition scores (about 3.0) – where 1.0 is extremely lean and 5.0 indicates excessive fat – can tolerate moderate worm burdens and are less likely to need drenching than animals in poor condition. This is said to reduce the direct cost of drenching and can prolong the effectiveness of chemical products before resistance develops.

The main worms that affect sheep in Western Australia are the scour worms, including brown stomach worm (Ostertagia) and black scour worm (Trichostrongylus), which can cause ill-health, diarrhoea and, in severe cases, death.

“Depending on the degree of severity of worm burdens, producers may be able to leave those sheep with the higher condition scores in the flock without treatment, which will minimise input costs and
save valuable time for farmers,”
Cornelius says.

With drench resistance on the march Australia-wide and the higher cost of new combination drenches, Cornelius says employing resistance management strategies is critical to the long-term cost of managing
parasites.

“Further research is determining how many sheep with higher condition scores we can leave in a mob before there is a negative impact on whole flock productivity,” she says.

Scour worm burdens are a major problem for producers in areas with cool wet winters.

“The nematodes thrive in temperatures from 16-30° Celsius, and with moisture present the larvae develop in faecal material and then move onto the pasture, ready for sheep to ingest.”

Part of her research project includes field experiments with close monitoring of body condition, body weight and worm egg count to compare the production responses between treated and untreated sheep.

“Producers can select sires with negative worm egg count ASBVs to further reduce the cost of parasite management,” she says.

Change to deal with drench resistance

An emerging drench resistance issue has been identified on Beef + Lamb New Zealand's Future Farm Lanercost in North Canterbury and a holistic plan is being put in place to protect future livestock productivity.

A farmer collective breeding for parasite resistant genetics claim they are leading the pack as drench resistance becomes more prevalent and drench failure is reported NZ-wide.