Trials look at the rattling of fewer dags 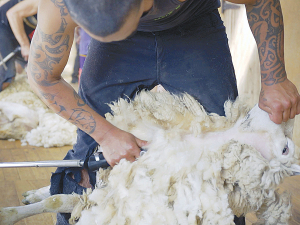 Dags are a very heritable trait which can be selected for.

Beef + Lamb New Zealand Genetics' Low Input Sheep Progeny Trial is identifying the genetics that will futureproof this country's sheep industry. In part one of this two-part series, we take a look at how the trial is set up and the focus on dags.

The property is the ideal testing ground for genetics. Orari Station is 75% tussock country, 15% lower hill with only 10% flats. Average annual rainfall is 1,200mm. Owner Robert Peacock says it is wet more than it is dry, so worms are a constant challenge.

Speaking at a recent B+LNZ Genetics Progeny Trial field day, Peacock said another significant driver in the need for low input sheep is the shortage of farm staff.

"It's becoming harder and harder to find staff to do the tailing, the dagging and the dipping."

Ironically, for a low-input sheep trial, there is a huge amount of work involved. This involves a lot of monitoring and measuring, which includes artificially inseminating ewes, measuring methane production - as well as the standard production recording associated with any progeny trial.

Peacock says he has been passionate about low input sheep farming for years and is concerned the industry as a whole doesn't know what's ahead of it - "or does it have its head in the sand?"

He says the steering committee for the Low Input Progeny Trial, which Peacock is part of, wants to encourage other stud breeder to select for traits such as worm resistance and dags to help the industry move forward.

"But it is up to commerical farmers to be asking their stud breeder for these traits," he says.

The first cohort of lambs was born in 2019 and the third mating has just finished.

Ewes lamb un-shepherded on the hill, and at docking lamb tails are measured and male lambs are left untailed.

"The way the world is moving we may not be able to tail and everything changes when you leave the tails on," Peacock says. "You have issues with dags and flystrike."

At weaning weights are taken and the ambs are given a dag score (but not crutched). All lambs are then drenched and dipped.

A control group of lambs is selected and while these are run with the rest of the lamb mob, unlike the others, they are drenched at regular intervals.

Without drench, the hill country lambs were growing at 140g/day between December and May. Even when they are pushed hard, Peacock says they were still gaining 100g a day.

A clover crop was used to lift condition and he says this worked well.

In the ewe lambs, Peacock found that growth rates dropped off after shearing.

“You’ve really got to be at the top of your game with low input sheep, you’ve got to get the management right when you’re cutting corners with drench.”

Peacock believes that dags will be one trait that will break the industry as it moves toward low input sheep.

However, these are very heritable and can be selected for. On SIL, there are only 34 breeders selecting for dags.

“It is the easiest, cheapest trait you can measure and commercial farmers need to start asking for it.”

Peacock says, in this trial the dags were “horrendous.”

“We were getting 4kg of dags off a single animal.”

He says at weaning there was no difference between the male and female lambs, but in March the difference was huge.

The average dag score for the females was 1.5 (one a scale of one to five with five being the worst) and 2.5 in the males.