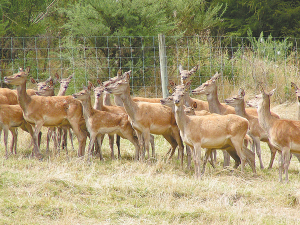 Made in New Zealand – with proven efficacy on both North and South Island deer farms – new Cervidae Oral is possibly the first deer-specific drench in the world.

“The drench story has frustrated deer farmers for many years, with no deer-specific treatment available,” explains Lawrence. “Parasites are the number one animal health problem on every deer farm in New Zealand. To get an effective treatment, of sorts, we’ve resorted to ‘cocktail’ mixes,” he adds.

With none of these mixes registered for deer, it has also meant a 91-day meat withholding period. Not only was this inconvenient, but it also put the whole venison industry at risk – if the 91 days not observed.

There has never been a parasite treatment for deer with real science behind it. In the past, products registered for sheep were considered workable.

However, Lawrence says deer are completely different to cows or sheep and the way the animals metabolise chemicals in the anthelmintic is different.

Furthermore, he adds that using sheep products meant most deer were underdosed.

“By underdosing all these years, we’ve been encouraging resistance,” Lawrence explains. “Ignorance was bliss – until the proverbial hit the fan.”

Cervidae has been almost five years in the making, the development cost shared by Deer Industry NZ and Nexan.

Lawrence was actively involved in the development of the product, working with Vetmed chemists Garry Harrison and John Petherick.

“Nexan were the only company to put their hands up for this project, none of the multinationals were interested in our very small industry,” Lawrence claims. “As it turns out, working on something specific for NZ – with a local company – has been the best outcome.”

He says Nexan have been an “exceptionally good” partner to the deer industry and believes the drench will have absolute efficacy in NZ.

Trial work on Cervidae Oral has been done as a requirement of ACVM approval.

To establish efficacy, trials were repeated on two properties: a South Island farm with a history of resistance and a North Island farm that had done very little drenching.

Safety was established by double-dosing the deer and there were no issues. They also assessed tissue residues to establish withholding time. Again, this was replicated in two distinct groups of animals.

“The data shows we are completely safe at 21 days.” Lawrence adds. “There was no residue in muscle, liver, kidney or fat tissue.”

The official withholding period has been set at 28 days.

He says the benefits of a deer-specific drench will mean farmers are able to optimise deer performance, achieving slaughter weights faster.

Dave Lawrence emphasises that farmers need to use the product responsibly.

“The more often we use a product, the quicker resistance will develop,” he explains. “Take on board the advice on how to protect the efficacy of Cervidae Oral because the chances of getting another drench developed for us is nigh on impossible.”

In short, his advice is to practice cross grazing, refugia, ensuring deer do not graze down to low residuals. Lawrence adds that farmers should always use a triple combination drench, dose to the weight of the animals and do not use a pour-on.

“Finally, we have an effective tool to treat the underlying parasite problem, the world’s first triple active for deer. Cervidae Oral will enable our deer industry to fly,” he concludes.