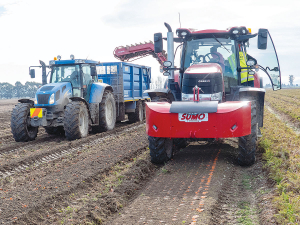 Tony Howey’s final carrot harvest is lifted for juicing for the Japanese market. Howey has sold his arable and vegetable cropping business to concentrate on his organic blackcurrant brand ViBERi. Rural News Group

South Canterbury grower Tony Howey and his wife Afsaneh plan to build up their ViBERi brand blackcurrant business on their 70ha certified organic farm on the outskirts of Pleasant Point.

Concentrating on the blackcurrants, which he jokingly refers to as his semi-retirement project, will be a big change for a man who has taken a leading role in a range of agricultural developments in the district. He says this shows how farmers coming together can achieve much more than any one farmer can achieve individually.

Raised on a family cropping farm at nearby Waitohi, Howey went into partnership with his brother David at Levels in 1987. They were among the original group of farmers in the district growing potatoes for McCains.

A few years later they diversified into onions, joining forces with other farmers to set up a packing plant which exported 15,000 tonnes of onions and 2000t of potatoes to Russia in its first year.

Howey has now sold his shares in that – because of the requirement for shareholders to be suppliers – but he proudly points out that Southern Packhouse has doubled its capacity to become the South Island’s largest packhouse. Last season it installed multi million dollar computerised optical grading equipment.

“When we came on the scene there were only Weston and Goodman Fielder. Now there’re four players and the pricing is reflecting that competition, to the benefit of the consumers,” he told Rural News

Howey was also a founding director and chairman of the Opuha Dam development, without which he believes the whole district would only have been good for sheep farming and lifestyle blocks because of the unreliability of river-fed irrigation.

He has also stepped up to wider governance roles, as a board member of Horticulture NZ and chair of its certifying agency NZ GAP (good agricultural practices) and he will soon finish a 13-year tenure on the Ravensdown board.