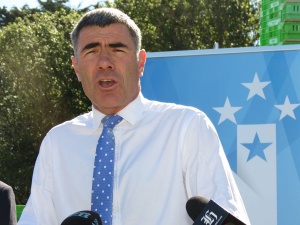 The MP for Otaki, who among other roles served two years as Associate Minister of Primary Industries and four as Minister in the John Key-led government, has announced he will not seek re-election in 2020.

"His door was always open, and he was always level-headed and considered in his dealings with people," says Federated Farmers president Katie Milne.

"He had his finger firmly on the rural pulse and I always appreciated that you could have free and frank discussions with him, including occasionally by phone when he was out helping weigh and drench calves. He has real empathy for the sector and for the wellbeing of rural communities."

When the Land & Water Forum was advocating for what farmers considered overly-ambitious rules on stock exclusion, Guy stood firm and was realistic about what would work in practice, Milne said.

"Biosecurity was one of his priorities and he began beefing up border security, a task that the current government has continued."

"The GIA framework not only puts farmers and growers in the decision-making room but, when dealing with outbreaks such as Mycoplasma bovis, mitigates the amount of cost that falls on farmers, and ensures exacerbators bear some of the costs as well.

"He also listened to farmers on climate change and his approach was pragmatic and workable," Rolleston said.