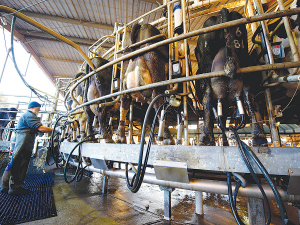 ASB has joined a large chorus of banks by picking a record dairy season and strong meat prices for the year ahead.

However, the bank's latest Farmshed Report also warns that while the near term looks good for dairy, beef and lamb, the outlook is more mixed for other key agri exports. It also highlights the challenges the sector is facing - including labour shortages, rising input costs, higher interest rates and stretched shipping capacity.

ASB has lifted its milk price forecast to $8.75 kgMS for the 2021/22 season in recent weeks. It says the dairy markets slowing over winter, they have now turned around.

"The supply response we expected to relieve some of the pressure on prices looks unlikely to materialise in the near term," the bank says. "It's early, but our forecast would represent the highest milk price since Fonterra's founding."

Meanwhile, it says meat prices are also in good shape and most commodity prices are still on the rise.

"Lamb prices burst through the record-breaking $9 mark during August and have continued to advance further. Beef prices aren't quite there yet, but have also notched up sizeable year-on-year gains."

The bank points out that its ASB Commodities Index reached an all-time NZ dollar high at the beginning of October and has continued to move higher from there.

"However, the most dramatic gains in commodity prices have been outside the agri-sector entirely. Energy prices have surged, with oil prices now up more than 70% on a year ago."

"Rather than the gradual return to normality that many hoped for, pandemic-era disruption continues to roil both the labour market and the logistics sector," the report adds. "The combo of strong commodity prices, surging freight costs and lofty wage pressures mean we now expect inflation to reach close to 6% towards the end of 2021."

ASB says strong inflation and a tight labour market are a recipe for higher interest rates.

It says the RBNZ has already lifted the OCR for the first time in seven years and further hikes look to be on the cards.

"Our research suggests that meat and dairy are proving relatively resilient to freight disruption, while price gains should be sufficient to offset the impact of higher costs," the report concludes. "For some other commodities - seafood, forestry, wine and some horticultural products - shipping challenges are proving to be more of an issue and prices haven't risen all that much, or have even fallen."

A new record milk price for this season has been forecast as dairy products fetch higher on the back of strong demand and softening supply.

"Content without being confident" is how ASB rural general manager Ben Speedy described the mood among dairy farmers at this month's National Fieldays.