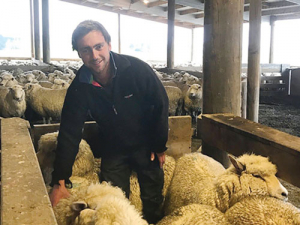 Fairlie farmer Nigel Bishell is using UHF RFID eartags on his flock and says it helps him achieve a big increase in lambing percentages. Supplied: ANZCO.

An expert in data management in the meat industry is calling for a fundamental change in the technology used in the NAIT (National Animal Identification and Tracing) system.

Mark Rance, the Group ICT Manager of meat processor ANZCO Foods Ltd, believes there would be long-term benefits to upgrading the RFID (radio-frequency identification) eartags and readers from their current LF (low-frequency)  system to a UHF (ultra-high frequency) system.

His comments come as NAIT undergoes a review, with suggested changes about to be put up for public consultation. The system is also under fire because farmers’ incomplete NAIT records have hampered the response to Mycoplasma bovis.

Rance said ANZCO has had input into the NAIT review but he did not expect a change in the technology to be a priority.

“It is important the review focus on the core issues like compliance rather than the technology specifically, though I might argue that a change of technology would help.”

The review is expected to concentrate on improving compliance both by making NAIT more usable, and by increasing enforcement.

However, Rance said he would be “very surprised and disappointed” if consideration of UHF technology did not eventually flow out of the review and subsequent work on usability of the system.

Rance said ANZCO and others had pushed “quite strongly” for UHF when the NAIT system was first being formulated, although at that time there was no commercially-tested UHF eartag on the market.

Since then, countries including China had adopted a UHF standard for cattle and Chinese-made UHF eartags were now readily commercially available.

“But the trouble is the decision has been made and now we’ve got this mandatory system which is based around low-frequency.”

Rance said the advantages of UHF technology included the ability to scan tags at distances of some metres rather than up close - “Which is not an issue for sheep necessarily, but it certainly can be if you’re trying to read a big bull or a stag.”

A UHF reader could also read multiple tags, he said.

“One of the limitations of low frequency RFID is that you can only read one tag at a time, which in some cases you want to do, but in other cases if you want to read sheep or deer running through a gateway you want to be able to read all of them. You don’t want to have to single-file them.”

UHF was also cheaper, said Rance, because it was the technology used in most other RFID applications around the world, such as inventory control by the likes of Amazon, Walmart and DHL. The reader hardware was therefore cheaper, being volume-produced off-the-shelf units.

Rance also sits on the board of GS1, an organisation which promotes international data standards. He said another problem with the LF system was that it used data of a proprietary format rather than the international standards supported by UHF tags, so it could not be as easily shared up and down the supply chain.

“Animal movements now are a critical part of our supply chain so when we share data with our trading partners it uses those data standards. But we cant take it back to the animal movements seamlessly because of the proprietary nature of that (LF) data,” said Rance.

Rance emphasised that ANZCO supported NAIT and was happy to work with the chosen system, but it also continued to encourage development of UHF and to encourage NAIT to consider future alternatives.

“At the moment the standard for NAIT is low frequency and that what we have to work with, and we do.”

However, he said within the context of global supply chains, LF was a “sunset” technology, sub optimal for use in fast-moving, data-heavy applications.

ANZCO recently highlighted the case of Fairlie farmer Nigel Bishell, who is using UHF ear-tagging in his sheep operation and credits it with helping increase his lambing percentages from 150% to 167% in two years.

A post on the ANZCO website said Bishell worked with ANZCO and technology providers to build his system, which allows rapid mob-based scanning of ear tags in the sheep yards.

Data specific to each animal, including body condition scores, weights and scanning percentages, go into a recording system to build up a database used for management decisions such as mating, culling and feed allocation.

Rance said the Bishells showed how well UHF eartagging worked. But while cattle and deer farmers could put UHF eartags in their animals if they wanted to, it would have to be in addition to the existing NAIT-approved LF eartags.

Rance said ANZCO itself was looking at using UHF RFID product tags for identification on cartons and containers of meat. It is currently trialling shipments of UHF-tagged product to the UK. “We’re not using it in a live situation but that might change this year,” said Rance.

He said UHF tags could be easily and automatically read at key points through the delivery chain. They provided for traceability, authenticity and certainty for consumers that the product is what it says it is.