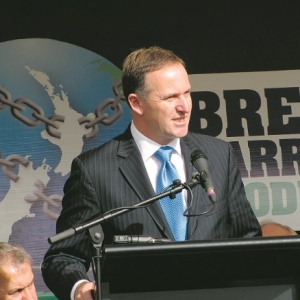 New Zealand is in the process of renegotiating the free trade agreement with China, Prime Minister John Key says.

He told a China Business Summit in Auckland today that FTA has been so massively successful; we have done a lot better than most parties thought.

"We are in the process of renegotiating the FTA. I think it is very important; it is the next milestone."

Chinese ambassador to New Zealand Wang Lutong said we will be the first developed nation to renegotiate a bi-lateral agreement with China.

Key said two-way investment would be very important and the next step in the relationship.

Talking about Fonterra's decision to invest into Chinese infant formula company Beingmate Key said the Chinese company is a massive player and Fonterra is a huge global player. "If you want access to international markets you want integration and you want it fast."

With the infant baby formula, there had been changes from the Chinese Government which had seen some consolidation. He said the market was growing rapidly and there won't be lots and lots of players, there would be a few.